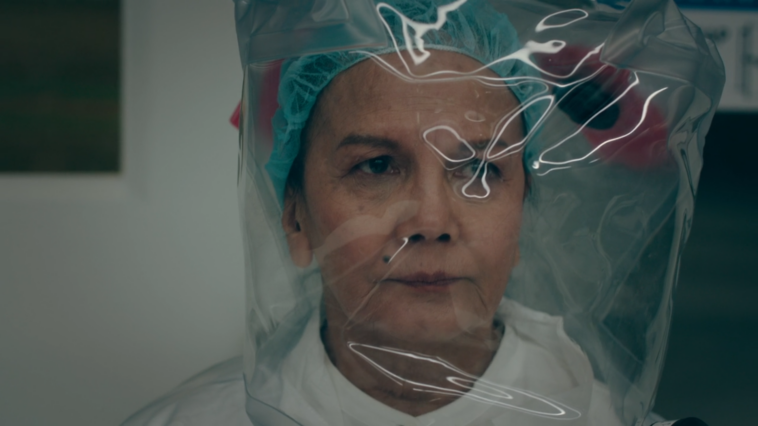 There are many things that the video game did well The Last of Us both in gameplay and in the narrative. Naturally, in order for the adventure to fit into the TV series, HBO is making some adjustments and there is one that was so shocking that it not only became the highlight of episode 2, but it is already the saddest, most disturbing, twisted scene. … and romantic of the saga?

The second episode of The Last of Us, infected, It was not due even though it was less than 1 hour. Once again, it opened with a sequence that serves as an epilogue, which the team is taking advantage of to gain the attention of the spectators, since it is when they are most receptive that they lend themselves to being intimidated and oriented —or disoriented—, according to Neil Druckmann, co-chairman of Naughty Dog, series creator, and director of this episode.

On this occasion it was used to show for the first time how the Cordyceps outbreak was in other parts of the world and not only in the United States; in fact, not only is the pandemic revealed to have originated in Indonesia, but also patient zero, thereby solving a major mystery in the game and reiterating that there is nothing to be done against Cordyceps.

After an introductory 10 minutes, the show takes us back to Joel and Tess, who are on their mission to escort Ellie to a group of Fireflies to take care of her, as instructed by Marlene, although unlike in the game , the trio took advantage of the night to rest and digest the shock with which they discovered that Ellie was infected.

In the morning, several places were visited that are necessary to get to the Massachusetts State House in Boston. However, one difference from the game is that a stop is made earlier at the flooded hotel, which originally appears until Chapter 5 of the game, precisely in Pittsburgh.

Later, the museum was visited, which served to introduce the clickers, the humans who are in the third stage of Cordyceps infection. As expected, the portrayal of these characters was exquisite (traditional costumes were used and not solely relied on special effects) and satisfactorily executed in a sequence that well communicated how they behave and the terror of meeting one of them.

One detail that was changed from the original game is that Ellie breathes in spores in the game and shows that they have no effect on her; in the series, when replacing the spores, that is projected with a second bite that Ellie receives in the same place as the first one and that still has no effect.

While we’re talking about the infected, I honestly didn’t really like the change to the way Cordyceps spreads in-game (fluids, bites, and spores). For practical purposes, the creatives found a new contagion vector and thus found the tendrils, a component that some species of the plant kingdom have and that Cordyceps would use to communicate and propagate, either through a surface or through humans. hosts it.

The idea is great and is based on how the fungal network works in real life, but what I didn’t like was the way in which the Cordyceps in an infected person can use these tendrils at will, when these filiform structures in they actually sprout from the infected host weeks after its death and serve as an antenna to further spread the spores. In the game it is replicated, since, upon death, the host enters a stationary state that releases spores, in addition to sprouting tendrils and more fungal structures… but in a matter of years, and not according to the will of the infected.

Druckmann said that this change was also made to approach the phenomenon in a more realistic way, and they achieve this with the mushroom network. But, for my taste, what is gained in realism there is lost with the tendrils as a vector of immediate contagion, which seems more like a means to make the show more attractive. The above isn’t bad (in fact, the effects look great), but it is contrasting. Although it is possible to let go of this enormous creative freedom because thanks to it we have one of the most grotesque, disturbing and twisted scenes in the franchise and without a doubt the most impressive so far in the series.

As soon as Ellie, Joel and Tess arrive at the meeting point with the Fireflies, another change is seen, since the group was killed, but not by PHAEDRA soldiers. Craig Mazin, the project’s screenwriter, explained that the reason was simply because it didn’t make sense for Phaedra to be there, since there was nothing to patrol. That is why the infected were better chosen, who stole the reflectors in this episode. In fact, unlike in the game, since they left the quarantine zone there have been no confrontations with the military, either from FEDRA or from the Fireflies.

It was here, in the midst of disappointment and despair, that Tess confesses that she was bitten after the struggle with a clicker in the museum and that in a few hours she should become infected. Surely those who played the title were prepared for a sad farewell, but they did not expect to find something romantic at all.

The sequence presents several changes, beginning with Tess being sacrificed in front of a horde of infected and not military, as it happens in the game, and for this the series made use of the connected and omniscient network of mushrooms that we told you about, which alerted nearby infected.

Tess’s ‘kiss’ with the infected is morbid, but also deep

Tess would sacrifice herself again to clear the way for Joel and Ellie, but the way was vastly different and disturbing and this is why it became the highlight of the series. The horde burst into the building, but instead of destroying Tess, no infected violently pounced on her, but there was only one who approached to give her a “kiss” through which he introduced her tendrils into the body. her.

The scene was shocking not only because it deviated from the original material, but especially because of how uncomfortable the act was presented in a beautiful and even romantic shot, as if the ‘kiss’ with the infected was the one that Tess could not give to Joel to say goodbye.

This scene, grotesque and morbid at first, is deeper. Tess explained to Ellie that the infected are more infected than they seemed and in this scene it is shown when no one attacks her because they already consider her part of them and the one who approached her and used the tendrils was to speed up the infection process of the brain. In this regard, Mazin commented that “the infected also love”; alluding to the fact that this is one of their ways of reproducing.

Something that I feel was wasted in the series is showing a little more of Tess. I would have liked to see the idea that Druckmann and Mazin had of showing their tragic past with their husband and their son executed, since they would have given original and new information about the character who is least known in the history of the series, something that is unacceptable if we take into account that she was close to Joel and the player at the beginning of the game and can even be considered as the mastermind of the smuggling duo.

Differences between the video game and the TV series The Last of Us — Episode 2: infected

In the end, after the intimate moment, Tess blew up the place, but not before inviting us to imagine that after everything, including Joel’s pessimism and the times that the series reiterates that there is nothing to do against Cordyceps, there can be hope. . Joel will try to keep her alive in the next episode, Long Long Timefocused on Bill and Frank, who say that it is one of the best episodes of the series and which we will undoubtedly analyze next week.