In the homily of the solemn mass of the Sunday of the Word of God, Francis affirmed that a Church with a “narrow” heart is a “curse”. Jesus “pilgrim” expands the borders. He sent his Lunar New Year greetings and “spiritual closeness” to those who are undergoing trials; prayer for Ukraine and its people who “suffer so much”. At the Angelus he explained that the “call” is the “decisive” moment for every Christian; it takes “courage to abandon” the quiet life and open up “to the unpredictable”.

Vatican City () – “With pain, my thoughts turn in particular to Myanmar, where the Church of Our Lady of the Assumption in the village of Chan Thar, one of the oldest and most important places of worship, has been set on fire and destroyed. of the country”, Pope Francis said today at the Angelus, referring to the violence of the military junta [aunque sin nombrarla directamente] against “the defenseless civilian population” which “in many cities is subjected to harsh tests”. “God willing that this conflict ends soon and begins a new time of forgiveness, love and peace,” he said. Then the Pope invited to pray a Hail Mary for that country. He had previously expressed “votes of peace” for all those “who celebrate the Lunar New Year in the Far East and in various parts of the world, but also “spiritual closeness to all those who are going through moments of trial caused by the coronavirus pandemic”. That “kindness, sensitivity and harmony in families” can permeate “our family and social relationships”. At the end of the Marian prayer, he recalled Cameroon, Peru and the “martyred Ukraine” and its people “who suffer so much”. for those who invoked peace.

But this is also, and above all, the Sunday of the Word of God, and the Pope gave a harsh warning: “Let it not happen to us – he said – to profess faith in a God with a wide heart and be a Church with a narrow heart”. , because this would be a real “curse”. “Salvation is for everyone”, even for the most “far away and lost”, the Pope recalled, and the proclamation becomes “the main urgency of the ecclesial community”. “We learn from Jesus – he continued – to put the Word in the center, to broaden our borders, to open ourselves to people, to generate experiences of encounter with the Lord, knowing that the Word of God does not crystallize in abstract and static formulas, but knows a dynamic history made of people and events, words and actions, progress and tensions.

Focusing attention on the themes of dynamism, conversion and proclamation, Pope Francis celebrated the Sunday Mass of the Word of God -which he himself established- with the Motu Proprio Aperuit Illis on September 30, 2019, on the third Sunday of Ordinary Time -, in which this year a passage from the Gospel of John is read: “We announce to you what we have seen”. During the mass, the ministry of Lecturer and Catechist was conferred for the first time on a group of lay men and women made up of faithful from the Philippines, Congo and Mexico to symbolize the universal Church. The Pope has chosen the third Sunday in ordinary time, within the framework of the Week of Prayer for Christian Unity and very close to the Day of Dialogue between Jews and Catholics.

Francis began his homily by referring to Christ’s decision to abandon a quiet life in Nazareth to be “always on the move” and invited to capture his “dynamism” to bear witness to the word of God “to all”. Jesus, he warned, is not “a doctor sitting in a chair; on the contrary, we see him as an itinerant, we see him as a pilgrim, visiting towns and villages, meeting faces and stories” and thus “widens the borders” because the Good News “does not It is intended only for the righteous of Israel, but for everyone.”

Then Francis referred to the second aspect: “the Word of God, which is addressed to all, calls for conversion.” It is a Word that “shakes us, worries us, urges us to change, to conversion”, that puts us in crisis because “it is alive”. “Like a sword, the Word penetrates life, making us discern – he warned – the feelings and thoughts of the heart, that is, making us see what is the light of good that must be accommodated and where instead the darkness thickens of the vices and sins that must be combated”. And this, he pointed out, “is the path that the Church shows us” to remain “united under the authority of the Word of God”.

In his homily, the Pope then listed the second aspect: “the Word of God, which is addressed to all, calls for conversion.” A word that “shakes us, makes us uncomfortable, provokes us to change, to conversion”, which puts us in crisis because it “lives”. “Like a sword, the Word penetrates life, making us discern – he warns – the feelings and thoughts of the heart, that is, making us see which is the light of good to which we must give space and where instead the darkness of the vices and sins to be combated gathers”. And this, he specifies, “is the path that the Council has indicated to us” remaining “united in the one Church of Christ”.

The third and last theme is a call to the task of proclamation, which is not carried out by proselytism but by attraction. On the shores of Lake Galilee, when Jesus calls Simon and Andrew, he turns them into “fishers of men.” The dynamism of the Word “attracts to the ‘net’ of the Father’s love” and turns us into apostles “who feel the irrepressible desire to get on the boat of the Kingdom to everyone they meet”. Finally, the Pope thanked all those who carry the announcement, and recalled that “our mission is to become seekers of the lost, of those who feel oppressed and discouraged, not to bring them ourselves, but the consolation of the Word, the impetuous announcement of God that transforms life”.

After the mass, when he introduced the Angelus, the pontiff delved into the evangelical passage of the call of the first disciples, in which he addresses them a direct invitation: “Come with me!”. “Leaving in order to continue” is the method that Jesus uses, and which places us before a decision that constitutes the “decisive moment for every Christian” because “here the meaning of everything else is at stake. If the courage to put In progress, there is a risk – warned the Pope – of remaining as spectators of one’s own existence and of living the faith halfway”. For this reason, following Christ requires “the courage to leave behind” not only vices and sins, but also “fears, selfish calculations, guarantees.” As an example, Francisco cited the decision of “a young family, which leaves a quiet life to open up to the unpredictable and beautiful adventure of motherhood and fatherhood” or “a doctor or a health professional who has given up a long time free to study and prepare, and now he does good dedicating many hours of the day and night, much physical and mental energy to the sick. 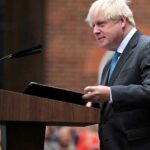