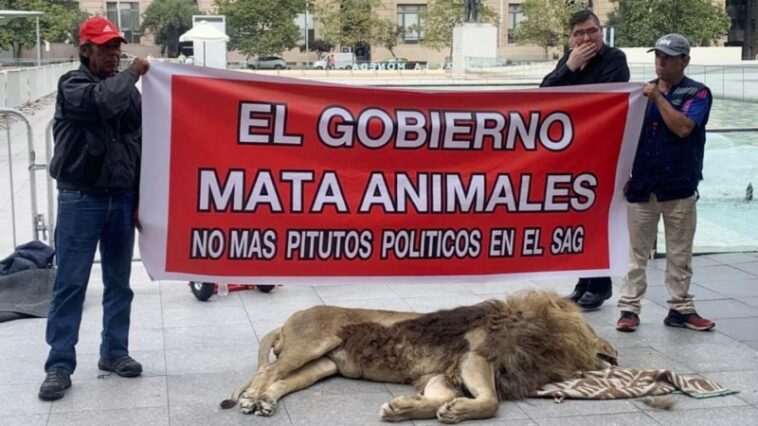 A real dead lion startled passers-by on Friday in front of the Chilean presidential palace amid a protest against officials from a state service who reportedly ordered animals to be sedate before a procedure, causing the cat’s death.

A group of zoo workers argued that the Agricultural and Livestock Service (SAG) should be more demanding in hiring its officials to make them more competent, said César Chanampa, legal representative for the Los Angeles City Zoo, about 470 kilometers south of Santiago.

Animals “can’t take an electrocardiogram or a blood test before sedating them, that’s the problem,” he said. “So here they went to rajatabla to order us to sedate the animals and they made us stain our hands with blood,” he added.

Local television morning shows broadcast live from the demonstration with images of the cat covered with signs while passersby tried to take photos and videos. The police isolated the place to later remove the remains of the animal.

In a statement, the service said that during a control procedure at the zoo carried out on Thursday, it was requested that the veterinarian of the enclosure anesthetize a group of animals for the reading of the identification microchip that all animals must have in this type of facility. facilities.

“Unfortunately, one of the animals that underwent this procedure died during its implementation,” said the note, which added that the anesthesia process is part of the usual procedures for handling this type of specimen.