Francis’ text for the event to be held this year on October 22, entitled “Burning hearts, feet on the way,” was published. The Pope dedicated a special thought to missionaries who are going through difficult times: “The Risen One is with you and he sees his generosity.” The invitation to cultivate in the mission listening to the Word of God and the Eucharist “missionary action par excellence”, “otherwise we only transmit our ideas and projects”.

Vatican City () – “Today more than ever, humanity, wounded by so many injustices, divisions and wars, needs the Good News of peace and salvation in Christ.” This is how Pope Francis writes in the message for World Mission Day 2023 published today by the Vatican Press Office. The text, which is entitled “Burning hearts, feet on the way (cf. Lk 24,13-35)”, prepares the appointment that the Church will celebrate on Sunday October 22 and also contains a particular word “closeness in Christ to all the missionaries of the world, especially those who are going through difficult times: the Risen Lord, dear brothers, is always with you and sees your generosity and your sacrifices for the mission of evangelization in far away places”.

“The Lord – he explains – is bigger than our problems, especially when we encounter them when announcing the Gospel to the world, because this mission, after all, is his and we are simply his humble collaborators, useless servants. Not all the days of life are full of sun, but let us always remember the words of the Lord Jesus to his friends before the passion: ‘In the world you will have affliction, but have courage: I have overcome the world’ (Jn 16,33)” .

Three images taken from the Gospel of the disciples of Emmaus mark the reflection: the burning heart for the Scriptures that Jesus explains, the eyes open to recognize him and, finally, the feet on the road. “Today too – the Pope recalled before all – the risen Lord is close to his missionary disciples and walks alongside them, especially when they feel lost, discouraged, frightened by the mystery of iniquity that surrounds them and wants to suffocate them”. His Word enlightens and transforms the heart of the mission: “Knowledge of Scripture is important for the life of the Christian, and even more so for the proclamation of Christ and his Gospel. Otherwise”, asks Francisco, “what can be transmitted to others if not one’s own ideas and projects? And can a cold heart make others burn? Let us be accompanied by the Risen Lord who explains to us the meaning of the Scriptures. Let him set our hearts on fire, enlighten us and transform us, so that we can announce to the world his mystery of salvation with the strength and wisdom that come from his Spirit.”

However, it was before the breaking of the Bread that the eyes of the disciples were opened to recognize Jesus. “Christ, who breaks the bread – observes the Pontiff – now becomes the broken Bread, shared with the disciples and, therefore, consumed by them. He became invisible, because he entered the hearts of the disciples to make them still burn more, urging them to set out again without delay to communicate to everyone the unique experience of the encounter with the Risen One”. Francis recalls that “the simple fact of breaking material bread with the hungry in the name of Christ is already a Christian missionary act”, but “breaking the Eucharistic Bread, which is Christ himself, is the missionary action par excellence, because the Eucharist is the source and summit of the life and mission of the Church”.

And then there is the rush to get back on track once they have recognized the Lord: “The first and principal resource of the mission – writes the Pope – are those who have recognized the risen Christ, in the Scriptures and in the Eucharist, and who carry his fire in the heart and its light in the eyes. They can bear witness to the life that never dies, even in the most difficult situations and the darkest moments.” Remember the “perennial validity of the missio ad gentesthe mission entrusted to the Church by the Risen Lord to evangelize every person and every people to the ends of the earth” because – he repeats, citing his apostolic exhortation Evangelii Gaudium– “everyone has the right to receive the Gospel”. Christians have the duty to proclaim it without excluding anyone, not as someone who imposes a new obligation, but as someone who shares a joy, points to a beautiful horizon, offers a desirable banquet”. And it is a missionary movement to which everyone can contribute: with prayer and action, with offerings of money and suffering, with their own testimony “The Pontifical Mission Societies are the privileged instrument to promote this missionary cooperation on a spiritual and material level.”

Lastly, the Pope recalls how “mission” is one of the central words of the synodal journey underway throughout the world. “It is certainly not a withdrawal of the Church in on itself; it is not a process of popular voting to decide, as in a parliament, what should be believed and practiced or not according to human preferences. It is rather a matter of setting out as the disciples of Emmaus, listening to the Risen Lord who always stands among us to explain to us the meaning of the Scriptures and to break the Bread for us, so that we can carry out his mission in the world with the power of the Holy Spirit”.

“Let us also set out – the Pontiff concluded – enlightened by the encounter with the Risen One and animated by his Spirit. Let us set out with a burning heart, eyes open, feet on the road, to set other hearts on fire with the Word of God, open eyes to Jesus in the Eucharist, and invite everyone to walk together the path of peace and salvation that God has given to humanity in Christ”. 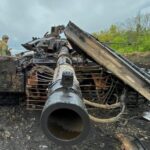