Why is there less lightning in the oceans? 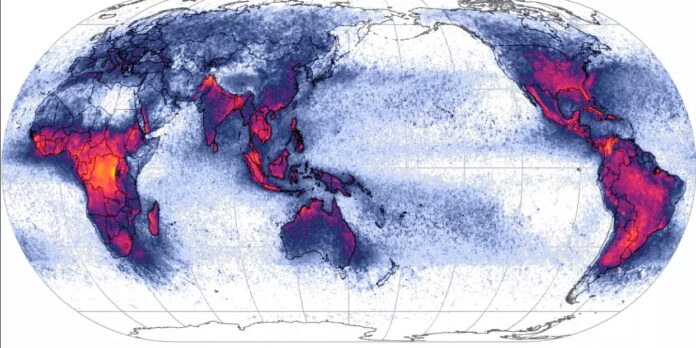 Salt in sea spray could reduce lightning activity during marine thunderstorms, a paper published Tuesday suggests. in the magazine Nature Communications. The findings could help explain why lightning levels over tropical oceans are reduced compared to the number seen over land.

If one takes a map of distribution of lightning throughout the planet, based on satellite observations, there is a fact that is very noticeable to the naked eye: the vast majority of discharges are located in continental areas and hardly occur in ocean areas, including found in the tropics, where there is more storm activity.

Today we know that thunderstorm activity over land occurs due to the effects of thermodynamics and aerosol-cloud-precipitation interactions. However, it is not clear why lightning activity over tropical oceans is significantly reduced compared to land.

Observation from the satellite allowed us to confirm decades ago that lightning is not evenly distributed around the planet. The areas of least activity are, logically, the poles – where there are no electrical storms – and approximately 70% of the lightning strikes occur in the continental zone of the tropics. According to Wikipedia, the place where lightning strikes most frequently (with data from 2004 to 2005) is near the small town of kifuka in the mountains of the east of the Democratic Republic of the Congo, at about 1,700 meters above sea level. This region received 158 lightning strikes per square kilometer per year.

To investigate why lightning may be less frequent over the oceans, Daniel Rosenfield and his team analyzed meteorological, aerosol, and lightning activity data from Africa and adjacent oceans (between 50°W and 50°E and 20°S and 20°N) from 2013 to 2017. And what the authors saw was that coarse marine aerosols, such as salt, reduced the frequency of lightning.

According to these results, fine aerosols promote the electrification of clouds, as they do over land, while coarse salt particles in ocean spray reduce lightning by weakening convection within clouds.

The authors also conclude that large particles promote warm rain precipitation before cloud water can rise to levels needed for supercooling, a necessary step toward cloud electrification. This has the effect of reducing the upward transfer of heat over the sea.

This result, according to the researchers, will improve our understanding of why lightning is unevenly distributed over land and ocean, and the effects this has on climate.

“Previously known differences in thermodynamics and aerosols could not explain much of the large excess in lightning activity over land compared to the ocean for the same amount of rainfall.”they write. “Here, we solve this question”.

In terms of climatic significance, these results reveal that less upward heat transport occurs in the ocean for the same amount of surface rainfall. “This requires more precipitation to meet the radiative deficit of the troposphere over the ocean”sentence. “Therefore, more correctly accounting for the contrasting effects of fine and coarse marine aerosol would improve the calculated rainfall amounts and the vertical distribution of latent heating, which drives much of the atmospheric circulation system.”.

These are the 5 best companies to work for in Latin America, according to Great Place To Work

They denounce religious “repression” in Cuba