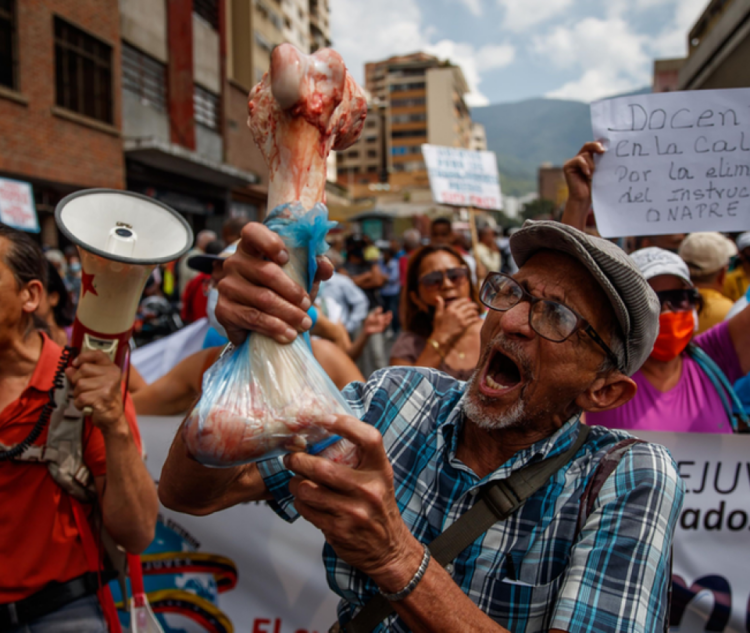 Tied to the fate of oil prices, the Venezuelan economy has for decades resembled a roller coaster with constant twists and shocks galore.

That roller coaster began in 2013 a vertiginous fall during which the Gross Domestic Product (GDP) shrank by around 80%.

During that journey, Venezuelans experienced a prolonged hyperinflation and saw how their currency, the bolívar, was worth more as paper for crafts and handicrafts than as a means of payment.

The lifelong bolívar, which during the government of Hugo Chávez had been devalued and renamed the strong bolívar, was successively transformed into a sovereign bolívar (2018) and a digital bolívar (2021), leaving behind a total of 14 zeros.

Despite everything, in recent times, some good news had begun to emerge about the Venezuelan economy: the country came out of hyperinflation in December 2021, it began to increase its oil production -which had fallen to levels of the middle of the last century- , while international experts and institutions forecast GDP growth to varying degrees during 2022.

Behind these improvements there was, among others, a fundamental change: the informal dollarization of the economy.

Since Hugo Chávez imposed an exchange control system in 2003, the use of foreign currency in Venezuela has not only been restricted by the government but has even been criminally prosecuted.

However, forced by circumstances, the government of Nicolás Maduro took a turn in 2018 when he repealed the Illicit Exchange Law to allow the use of the dollar in Venezuela.

The measure meant an important change since from then on companies, merchants and those with access to foreign currency were able to start working and planning their operations based on a more stable currency, something that was practically impossible with a bolívar hit back then. due to inflation that in 2018 reached 130,060.2%, according to official figures from the Central Bank of Venezuela (BCV).

This is how, in recent times, the Venezuelan economy began to experience an incipient recovery that, some with irony and others without it, have summed up in the hyperbolic phrase: “Venezuela fixed itself.”

The change was stronger in the parallel market, where on the same dates it went from 7.04 bolivars per dollar to 9.33. That is, almost 33%.

The shock generated alarm among Venezuelans and led Maduro to post a message on Twitter in which he invited his followers to “fight the battle” for economic stability.

BBC Mundo tells you what is behind this strong devaluation of the bolivar.

Orlando Zamora, financial analyst and former head of the exchange risk analysis division of the Central Bank of Venezuela, considers that the strong devaluation suffered by the country is due to the combination of several factors, among which the depletion of international reserves stands out.

He affirms that after dollarization, the BCV had initially been flexible and had responded to the law of supply and demand, for which, he assures, many believed that the dollar would have its true market price and the parallel market would disappear.

However, later the BCV began to apply an anchor policy to try to contain the devaluation of the currency.

This attempt to anchor meant that the BCV had to constantly intervene in the market, selling dollars from its reserves to satisfy the growing demand for dollars. But, now, those resources are depleted.

“The reserves of the Central Bank are over US$5.1 billion, but of that amount there are about US$4.8 billion in gold, so there would be barely 16% left in cash and it would be necessary to see if everything is negotiable because there have to be bonds difficult negotiation. The BCV had to burn its reserves to be able to compensate and maintain that policy of supplying foreign currency to the market. Now anchoring it is almost impossible,” says Zamora.

“This policy was broken because the Central Bank overestimated its ability to control a market and with the serious problem of not having liquid reserves,” he added.

Leonardo Vera, professor at the School of Economics of the Central University of Venezuela and number one of the National Academy of Economic Sciences, considers that the “exchange crisis” experienced by that country last week responds, in addition to the exhaustion of international reserves, to the increase in bolívares that were put into circulation by the authorities in response to the social demands of the workers.

He explains that the Maduro government had been applying a kind of undeclared anti-inflationary policy that consisted of 3 measures:

Vera indicates that in Venezuela the minimum wage had been increasing every three months due to the inflationary situation, but that this stopped in May 2021 and there were no more increases until March 2022.

“The government decided to give a large increase because a lot of inflation had accumulated since May of last year. That is to say, the scheme burst,” says the expert.

He explains that when Maduro decided on this increase, the minimum wage had fallen below US$2 per month.

The increase was 1,705%, despite which the minimum wage barely ended at around US$28 a month.

But, parallel to the increase in the minimum wage, the government tried to contain payments to public employees by issuing an instruction through the National Budget Office (Onapre) that reduced the payment of the bonuses that they receive as a complement to their salary and which normally represent a significant part of their income.

Vera points out that this instruction cuts many of the benefits that the workers had obtained through the collective agreements.

This policy led to an increase in labor protests that reached its peak recently when the government tried to split the payment of two bonuses that traditionally pay public employees in July and that, according to Vera, represent approximately three months of salary.

This led to a strong series of protests before which the Maduro government chose to honor those economic commitments that were paid to public officials the week before the recent devaluation.

“Many of these people went to the banks to buy dollars, but they did not have dollars because the BCV was not offering. So, they go to the parallel market that cannot withstand that pressure and that exchange rate began to rise significantly, which makes that the BCV also react by raising the official exchange rate because if it lets the gap widen a lot, the stampede would be worse and worse,” Vera points out.

The expert explains that this episode is a “clear and reliable” sample of the distrust of citizens in the bolivar, which – from his point of view – is the main problem that was exposed by the devaluation of the previous week.

Orlando Zamora, for his part, points out that these social pressures led the government to relax the fiscal discipline it had been applying, which translated in monetary terms into an increase in the number of bolivars in the economy which, in turn, put pressure on the dollar price.

“The expanded monetary liquidity (money issued by the BCV + secondary money created by the banks when granting loans + all the money available to citizens) was 4,814 million bolívares in March 2022 and, at the end of August this year, it stood at 11,091 million bolivars. In just five months it grew 2.3 times,” he says.

The recent devaluation of the bolivar will have repercussions in Venezuela having a higher inflation than it had been registering in recent months and that, in itself, placed the South American country among the 5 most inflationary in the world.

Leonardo Vera warns that this will have an impact on the population because not all social groups have the same ability to protect themselves against inflation and it can reduce the purchasing power of citizens.

“That’s bad news for business and obviously bad news for an economy that’s only just recovering from a great depression,” he says.

Beyond these more concrete and immediate effects, Vera considers that this episode shows the importance of quickly reducing inflation to single digits when applying an anti-inflationary program like the one in Venezuela, because the restrictions on the legal reserve, on the exchange anchor and on the the payment of salaries have consequences on the economy and eventually they have to be lifted.

For this economist, the underlying problem is the lack of confidence in the Venezuelan currency and in the monetary and exchange institutions, which is an aspect towards which the strategy of the Maduro government was not oriented.

Orlando Zamora considers that the devaluation process of the bolivar will continue.

“It is a situation that for me is irreversible. I think they are going to have to let the bolívar slide against the dollar. Possibly the exchange rate can be reassured, but all the causes and factors that led to this situation of collapse They’re there,” he says.

He affirms that during the pandemic, because the economy was more paralyzed than now, the BCV could efficiently regulate that smaller market, but that when the incipient economic growth was registered, the strategy collapsed.

“For me, the adjustment plan that was being fulfilled and the expectation that there was about the recovery, the control of inflation, was disrupted, because for all the things that happened there was a very relative success with many quotes,” he says.

“Is the success of this plan guaranteed, is it going to keep inflation low? Definitely not, because the usual problems such as the growth of inorganic money, little productive capacity, dependence on imports, all these factors remain and will to continue putting pressure on what is vital for the economy, the dollar, because it is a purely importing economy,” he adds.

Thus, the roller coaster of the Venezuelan economy could bring new unexpected turns.

Now you can receive notifications from BBC News World. Download the new version of our app and activate it so you don’t miss out on our best content.