What conflict is there between Serbia and Kosovo and where does it come from? How might NATO react? 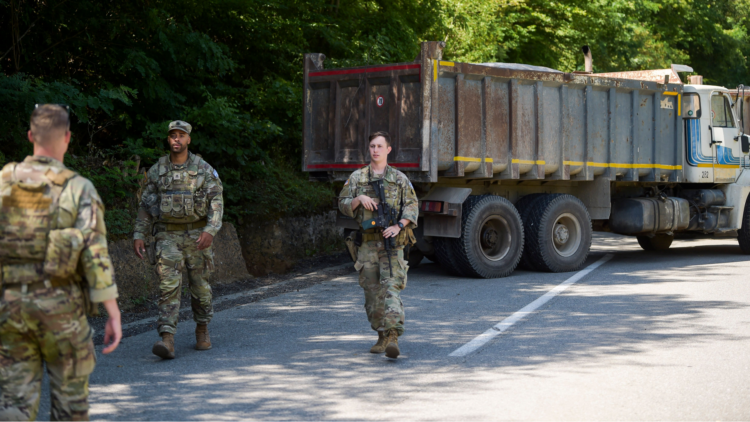 ( Spanish) — Serbia and Kosovo are once again experiencing an escalation of tensions on the border, due to the decision of the Kosovar government, not recognized by Belgrade, to issue identity documents to Serbs living in the north of the country.

The tensions have led to cuts at border crossings, aggression and increased patrolling by NATO troops, who maintain the fragile peace in Kosovo after the war with Serbia at the end of the 20th century.

Where does this conflict come from and what could happen?

In 1999 Yugoslavia—then composed of Serbia and Montenegro, which would later secede—launched military operations against the Liberation Army guerrilla —which was seeking independence from Kosovo— in the region of Kosovo, which was then one of its provinces.

Amid the violence, NATO troops entered Kosovo for UN mandate and to stop Serb attacks. Also, NATO carried out a controversial aerial bombardment campaign against Serbian forces. which led to the death of civilians.

US soldiers serving with the NATO force in Kosovo patrol next to a barricade set up by ethnic Serbs in the town of Zubin Potok on August 1, 2022. (Credit: ARMEND NIMANI/AFP via Getty Images)

The intervention led to the end of the war in June 1999, and in that year the NATO Force in Kosovo (KFOR) was formed under a UN mandate, which has maintained security and peace ever since.

In 2008 Kosova declared its independence from Serbia, a new status recognized by 100 countries (the United States among them). Serbia, however, denies this independence and continues to regard the region as an autonomous province. Russia has also not recognized Kosovo.

What are the current tensions

The most recent tensions between Serbia and Kosovo stem from the recent decisions of the Kosovar government to stop recognizing Serbian identity documents at border crossings, as well as to require the conversion of car license plates issued by the Serbian government. Both decisions were approved at the end of June and were scheduled to take effect on Monday, according to a tweet from Kosovar Prime Minister Albin Kurti.

Kurti accused the Belgrade authorities of instigating and planning “multiple aggressive acts” on Sunday, following blockades at various border crossings. The prime minister added that his government “strongly condemns” the obstruction of roads and the firing of weapons in the north of the country.

He also announced that his government will postpone the application of the two decisions until September 1, “once all the barricades are removed and complete freedom of movement is restored on all roads” in northern Kosovo.

Kurti said he has been in contact with US and European representatives, specifically thanking US Ambassador Jeffrey Hovenier for his “involvement and contribution.”

Serbia, for its part, said that Kosovo is to blame for the rise in tensions.

“Prime Minister Ana Brnabic stated that Serbia did nothing to start the crisis in Kosovo-Metohija,” a Serbian government statement said on Monday.

Kosovo-Metohija is the official name given to Kosovo by the Government of Serbia.

“The Serbs of Kosovo-Metohija have done absolutely nothing to cause what we are seeing today, but rather the opposite: this is the epilogue of years of mistreatment of Serbs in the province and non-compliance with international agreements,” he added. the notice.

Brnabic stressed that Serbia demands peace and stability, according to the statement.

Ethnic Serbs make up 3.4% of Kosovo’s population, while the vast majority, 91%, are ethnic Albanians, according to the 2011 Kosovo Census. Much of Kosovo’s ethnic Serb population lives near from its border with Serbia.

It is estimated that there are some 50,000 Serbs in northern Kosovo who still use Serbian identity documents and license plates, rejecting the authority of the Kosovo Government, and who are at the center of tensions.

In 2021 a group of Serbs had also blocked roads in protest at ID and license plate requirements. Kosovo answered sending special forces of its police, while Serbia made their fighter planes to fly over near the border.

The North Atlantic Treaty Organization (NATO) Force in Kosovo (KFOR) is closely monitoring the situation in the north of the country and is ready to intervene in the face of rising tensions on Kosovo’s border with Serbia, from which declared its independence 14 years ago.

An F-15E Strike Eagle from the US 494th Fighter Squadron takes off on a mission against targets in the Balkans on March 28, 1999. (Credit: by Jeffrey Allen/USAF)

“By virtue of its UN mandate, KFOR remains firmly committed to security, ready to take the necessary measures to maintain the security of Kosovo,” he said in a tweet on Monday.

In a statement released Sunday night, KFOR, which bill with 3,770 troops in Kosovo, said it is “prepared to intervene if stability in northern Kosovo is threatened.”

Even before its involvement in the Kosovo war in 1999, NATO had a long history of intervention in the Balkan region, and especially the former Yugoslavia.

In February 1994, NATO forces shot down four Serb warplanes violating the UN-imposed no-fly zone in Bosnia, in what was the Atlantic Alliance’s first use of force.

After the end of the war in Bosnia-Herzegovina in 1995, NATO led the UN-mandated Implementation Force (IFOR) to implement the peace accords.

With information from Xiaofei Xu and Reuters.