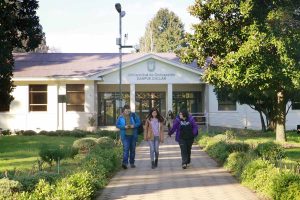 In the Chillán Campus of the University of Concepción, a discussion was held with the aim of sharing the initiatives promoted to promote a greater participation of researchers in the application to the various sources of financing, both internal and external. The activity, organized by the Vice-Rectory for Research and Development, seeks for academics from the three campuses to learn how to access support to manage their scientific research, artistic creation and technological development projects.

“Our Vice-Rector’s Office aims to support and disseminate information related to R&D&i&e in a homogeneous manner on the three campuses”, explained the Vice-Rector for R&D UdeC, Dr. Andrea Rodríguez Tastets. “We have worked since 2018 to generate project units in each of the campuses, which was paused due to the pandemic, and now we are resuming,” he added.

In the case of Campus Chillán, it has a Innovation and Project Management Unitled by the Dr. Valeria Velasco Pizarro. “There is a significant number of projects that have been executed and, recently, the projects that are now part of the new institutional framework of the Regional Government of Ñuble, that is, the FIC (Innovation Fund for Competitiveness) projects,” he explained. Dr. Rodriguez.

“In this context, we have seen the opportunity to strengthen this unit, not only having a director, but also hiring an engineer who, in coordination with the VRID, will be able to monitor these projects and interact with the GORE and the academics in directly, which will allow allocating the resources received from these projects directly in that territory,” he added.

Regarding the results of the meeting in Chillán, the Dr. Rodriguez He explained that “the academics emphasized to us some issues that seem extremely important to me, such as being able to clarify many procedural aspects regarding, for example, the Ethics, Bioethics and Biosafety Committee, in addition to aspects of technology transfer, patenting, and so on”.

Meanwhile, on the Los Angeles campus there is the Innovation, Project Management and Innovation Unit, under the leadership of the Dr. Jonathan Guzman Sandoval. “We still need to make progress in strengthening capacities based on the projects and resources that go directly into that unit. We need to motivate the participation of our academics so that they see that their participation and contribution in this area is to the benefit of their units”.

He added that they will soon hold a similar day in Los Angeles, for which they are already coordinating with the Campus Directorate. It may seem like a slow process, but we believe that it is the appropriate way to strengthen the University responsibly and in conjunction with the different campuses”.