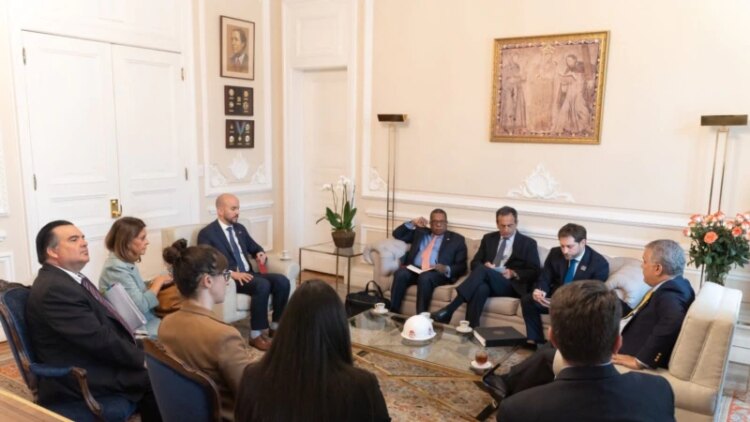 A little more than two weeks after the inauguration of the future president of Colombia, Gustavo Petro, the president-elect and his team met this Friday with a delegation from the United States government.

In a hotel in the Colombian capital, Petro initially held a meeting with Jonathan Finer, Deputy Principal Secretary of National Security of the United States, and later with the rest of the delegation. In addition, a typical Colombian lunch was offered, as confirmed by the press team of the elected president.

After the meeting, Finer told the press that he spent “hours” talking with the president-elect and his team on issues such as “climate change, immigration, the fight against drugs and many others.”

The delegate of the Biden Administration also pointed out that it has been a very “productive” day and that the US president sent it to “recognize the fact that the United States and Colombia are two sovereign nations, two equal partners that have a deep relationship that has been based on decades of work.” “The Biden administration is committed to strengthening this relationship over time,” he added.

For his part, the president-elect added that they also discussed peace, common security and democracy.

“It is a positive meeting that demonstrates the interest that today exists in the US government in Latin America and Colombia, and above all, an interest that is built around common work among equals, trying to build the reasons that allow us to resolve more effectively the problems, the circumstances, the situations that weigh on the American continent and on our two countries,” said the president-elect, in a joint statement to journalists.

Earlier, the US delegation met with the still president of Colombia, Iván Duque.

Through Twitter, the Colombian president described the meeting as “productive” and expressed his gratitude for “the recognition” of the US government for his work “in the defense of democracy, the fight against the climate crisis, trade and migration, priority issues for the bilateral agenda”.

The meeting was held behind closed doors and was not included in the media agenda.

As reported by the White House in a statement, the objective of the meeting is to lay the foundations for joint work between the United States and Colombia, and address issues such as “the fight against climate change, support for the implementation of peace and rural development , joint work to reduce violence and combat criminal groups, promote equitable and sustainable economic growth both for our countries and for other regional and global countries”.

On Monday afternoon, Petro held a meeting with Ambassador Palmieri to finalize details of the visit of the commissioners of the Government of Joe Biden.

"Putin spits in the face of Guterres and Erdogan"