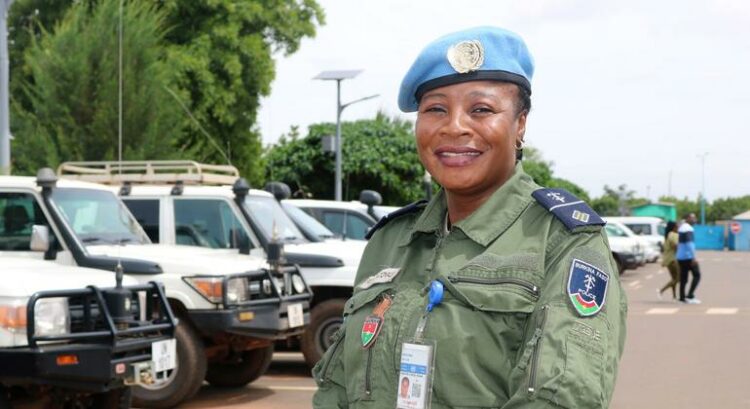 A Burkinabe UN peacekeeper working in Mali will be honored on Wednesday for her work in fostering relations between the authorities and local communities, including those of survivors of gender-based violence.

Senior Petty Officer Alizeta Kabore Kinda is the winner of the 2022 United Nations Policewoman of the Year Award.

The award was created in 2011 and aims to recognize the exceptional contributions of female police officers to UN peacekeeping operations and promote the empowerment of women.

Warrant Officer Kinda works as a gender coordinator with the UN Mission in Mali and helps the country’s security forces to promote and improve understanding of gender, child protection, and human rights issues and civil protection in the Ménaka region.

Through her efforts, she managed to get more victims of sexual and gender-based violence to report their cases to local authorities and receive medical care. Since his arrival, it has gone from no accusation to the current three or more per month.

A shining example of how women can contribute to peace

“The work of Chief Petty Officer Kinda is a shining example of how the participation of policewomen in peacekeeping operations directly influences peacebuilding, helping to incorporate different points of view and making our work more inclusive” , declared the Assistant Secretary General of the United Nations for Peacekeeping Operations.

“With your actions represents a more representative and efficient police force, better equipped to serve and protect the public“said Jean-Pierre Lacroix.

Inspiration for women and girls

Upon receiving news of the Award, Kinda expressed her hope that the accolade will inspire women and girls around the world to pursue careers in policing “despite the gender stereotypes often associated with the profession: that men are better prepared to apply the laws and protect the population”.

The peacemaker will receive the award this Wednesday during the third UN Police Chiefs Summit to be held at the UN headquarters in New York between August 31 and September 1.

“Both she and her team help foster the relationship between the local authorities in Mali and the communities, which makes United Nations Police work more effectively and people safer“.

The United Nations Police works for international peace and security by assisting host countries in situations of conflict, post-conflict or other crises.

Women make up more than 19% of the approximately 10,000 UN police officers serving in 16 peacekeeping operations around the world.

Throughout her career, Kinda has focused on the protection and promotion of the rights of women and children, such as when she was gender coordinator at the UN Mission in the Democratic Republic of the Congo between 2013 and 2015.

In her country, Burkina Faso, she performed these functions in the Ministry of Security and in the Regional Brigade for the Protection of Women and Children, a national police unit where she served as an investigator of cases of sexual violence and exploitation.

Fortnite: how to get Dreamer for free in Rainbow Field?