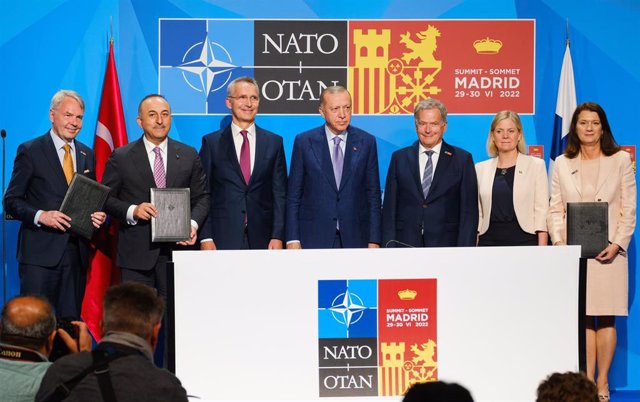 Archive – The main political leaders of Turkey, Sweden and Finland sign the agreement for the integration of these last two countries into NATO – -/NATO/dpa – Archive

Turkey’s increasing pressure on Sweden, following a series of protests in Stockholm where effigies of President Recep Tayyip Erdogan have been burned to copies of the Koran, has opened a crack in the hitherto unappealable alliance with Finland to advance accession of the two Nordic countries towards NATO. The goal is still to enter together, but the Finnish government has already dropped that it does not have to be like that.

The Finnish Foreign Minister, Pekka Haavisto, has recognized this Tuesday for the first time that both countries must rethink the strategy of moving forward together if necessary. “We have to be prepared to reassess the situation,” he told Finnish public television Yle.

Likewise, it has stressed that “it is too soon” to determine if “something has happened that prevents Sweden’s request in the long term”, while stressing that “from the security perspective of both countries, (the entry into NATO) is clearly the first option”.

In subsequent statements to the media, the head of Finnish diplomacy has tried to qualify his words by insisting that Stockholm and Helsinki continue “trying to move forward together” and has confirmed contacts both with his Swedish counterpart, Tobias Billström, and with the Secretary General of the Atlantic Alliance, Jens Stoltenberg.

Not surprisingly, Billström has acknowledged after Haavisto’s first words that he would ask the Finnish authorities for clarification, according to the SVT chain. “Sweden respects the agreement between Sweden, Finland and Turkey regarding our integration into NATO,” she insisted, alluding to the agreement signed on the sidelines of the leaders’ summit in Madrid.

Sweden maintains that it has fulfilled all the commitments made in that pact, which mainly called for greater efforts to persecute Kurdish groups that Turkey considers terrorists, but Erdogan warned on Tuesday that, as things stand, the Swedish government cannot ” wait” for the definitive endorsement of Swedish accession.

The Finnish Defense Minister, Mikko Savola, has advocated on Twitter for “keeping a cool head”, also recalling that the two neighboring countries submitted their request to join the Atlantic Alliance “at the same time” in May 2022.

Sweden and Finland depend on the approval of the 30 member states of the Atlantic Alliance to join, a ratification that has advanced in record time but is pending processing in Turkey and Hungary. Technically, they are separate processes, so the Turkish Parliament could give Finland the green light without endorsing its partner.

Apart from the interests of the Swedes and Finns, the objective of defending simultaneous integration also continues to be the keynote in NATO. “Finland and Sweden requested to join NATO at the same time. The 30 allies invited both countries to join last June, and 28 have already ratified their accession protocols,” Stoltenberg said on Tuesday, in statements collected by Europa Press.

In this sense, the former Norwegian prime minister stressed that it is the fastest accession process in NATO’s recent history and stressed that the entry of both is a “priority” for the Atlantic Alliance. Both participate in NATO meetings, sit at the allies’ table and are integrated into consultative groups and military activities, he has insisted.

“I look forward to its full adherence to NATO, which is in everyone’s interest,” Stoltenberg concluded, in a few words that come after Finland opened the door for the first time to consider membership without Sweden, due to the continued reluctance shown for Turkey. 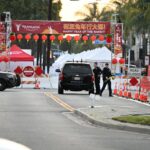