The phenomenon of kidnappings for extortion purposes at the hands of gangs that operate with impunity is growing. The families of origin are asked for modest sums, which never exceed 500 euros. Tehran’s crackdown on Mahsa Amini protests “obscures” the migration emergency. Meanwhile, Ankara continues its repatriation policy.

Istanbul () – “Afghans do not know the area well and end up getting lost in small villages where they become easy prey for armed men.” Sami (his name is fictitious) is one of the many who fled Kabul after the rise of the Taliban and was deported by Ankara. With his, the testimony of his own experience, he wants to denounce the growing phenomenon of kidnappings for extortion purposes of which migrants are victims along the border between Turkey and Iran. These are small gangs, he explained to Middle East Eye (MME), and they ask the families of origin for sums that do not exceed 500 euros.

The kidnappings for ransom add to the abuse and violence suffered by Afghan refugees in Iran and Turkey, two countries on the path of tens of thousands of desperate people fleeing the Taliban. These groups, Sami continues, take advantage of the fact that the refugees trekked for weeks through rugged and mountainous areas in Iran before entering unknown territories in Turkey. “They attack Afghan migrants – he explains – at a moment of weakness, when they are tired, hungry from the long journey and feel lost. And even if it’s 10 Afghans against just two or three criminals, they’re too tired and weak to try to fight back.”

While Ankara continues with the repatriation policy, with hundreds of refugees deported in this month of January alone – and another 5,000 in the coming days – videos related to the phenomenon of kidnapping for extortion begin to appear. One video shows a group of Afghan men huddled with their faces pressed against a rock face and their hands tied behind their backs. One of them, gagged, is threatened with a combat knife with which they cut off his ear. Another video shows some refugees, shirtless despite the cold, shackled and kneeling, crying and pleading as they are whipped with a belt.

Ali Hekmat, who has been helping refugees in Turkey for more than a decade, tells “countless” stories of criminal gangs abusing Afghans, especially near the border with Iran. Most of them try to enter Turkey without documents, so there are no exact statistics, but there are “constant” messages from those who send ransom requests to their relatives because they have fallen into the kidnappers’ networks.

The issue of Afghan refugees, who travel a not without risk route through Iran and Turkey to try to reach Europe, the United States or Australia, continues to be a matter of deep concern more than a year and a half after the rise of the Taliban. in Kabul. There are numerous cases of arrests, abuses, violence and deaths denounced by NGOs and recorded in the daily news, such as the migrant who froze to death while trying to cross the Turkish border at the beginning of 2022. An emergency that is considered a “bomb”. humanitarian” for Europe itself.

An source recalled at the time that “many people” have died along the border in a “desperate attempt” to start a new life away from Koranic students, who have already imposed numerous rules inspired by sharia, islamic law. The brutal repression of the protests that have been going on for four months in the Islamic Republic over the death of the young Kurdish woman Mahsa Amini, 22, at the hands of the moral police for not wearing a hijab, further fueled the violence. The iron fist of the ayatollahs has pushed the endless drama of migrants into the background, often forgotten by international institutions and governments. 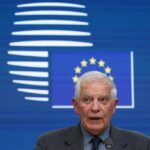