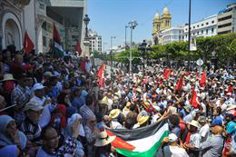 The Tunisian population is summoned to the polls this Monday to vote in a referendum on a controversial draft Constitution promoted by the country’s president, Kais Saied, within the framework of a series of measures promoted since July 2021 all powers were arrogated after dissolving the Government and suspending Parliament –later dissolved– and in the midst of calls for a boycott by the opposition.

The referendum coincides with the anniversary of the president’s decision to apply exceptional measures, in what he has defended as “a correction” of the path opened after the 2011 overthrow of the then president, Zine el Abidine ben Ali, during the ‘Arab Spring’ , which led to the approval of a new Magna Carta in 2014.

Saied announced the dismissal of the government headed by Hichem Mechichi, suspended Parliament and withdrew parliamentary immunity, measures that have resulted in a large concentration of powers in his figure and in opposition complaints about a “coup d’état”.

In this context, he revealed in September that he would govern by decree and appointed Najla Buden Romdhane as prime minister, although her role has been reduced by Saied’s powers to supervise the judicial apparatus and the Army.

Saied has defended this new ‘roadmap’ and has recalled that when he decided to dissolve the Government the country was mired in a serious crisis, including demonstrations due to the lack of solutions to economic problems and the stagnation in the application of the commitments made during the ‘Jasmine Revolution’.

Saied’s initial decisions were applauded by the population, given that Parliament was considered one of the main responsible for the government paralysis, as recalled by the ‘think tank’ The Tahrir Institute for Middle East Policy.

Since then, the president has stressed that he is working to fight corruption and “traitors,” among whom he includes his critics — including members of the moderate Islamist Ennahda party, which held the majority of seats in Parliament — by time that he has said that the Constitution approved in 2014 “has no legitimacy”.

Saied’s policies have provoked mobilizations due to the growing discomfort among the population due to the lack of progress and the deepening of the economic crisis — amplified by the coronavirus pandemic and the war in Ukraine –, while opponents and civil society have denounced its authoritarian drift.

In fact, the opposition has coalesced around the National Salvation Front, headed by Ahmed Neyib Chebi and which includes Ennahda, and has advocated creating a transitional government ahead of elections. This amalgam of formations has said that Saied’s measures are invalid as they do not have the support of Parliament.

Despite this, in January the president launched a National Consultation Process with a view to the referendum, a model in which the population was summoned to speak via the Internet about the process of drafting the Magna Carta -commissioned to a series of experts appointed by Saied himself– and in which nearly half a million people participated.

In a sign of the division in the country, the president defended the success of the process, while Ennahda and other parties that had asked to boycott the consultations highlighted that the low participation -marked by the fact that the points had predefined answers- – showed how little popular support Saied has.

Finally, the draft was unveiled in June, causing a major stir due to the concentration of powers around Saied and the threats to limit rights and freedoms, which led the president to introduce small amendments that did not change the document substantially. .

The hand of the president is visible in the preamble of the project, which states that the measures since July 2021 are “a correction of the revolutionary path”, while reflecting a “hyper-presidential” system that brings together the majority of powers and reduces the power of Parliament.

Thus, it contemplates that the president exercises the “executive function” with the help of the Government and emphasizes that he has total immunity in the exercise of his functions. Likewise, he appoints the prime minister, who subsequently presents him to the members of the Executive for his approval.

In addition, he has authority over the Army and the justice apparatus –despite the complaints from judges about his interference and the dismissal of magistrates accused by himself of “corruption” and “covering up terrorists”–, while he can adopt ” exceptional measures” in case of “imminent danger” for the State.

To this are added broad legislative powers to the president, who will have the authority to suggest bills and issue decree laws during periods of recess or if Parliament is dissolved, a situation in which it finds itself now. The legislature also cannot pass laws that affect the powers of the president or financial matters of the Presidency.

The draft maintains the article of the Magna Carta of 2014 on which the president based himself to declare emergency measures in 2021, although it includes the elimination of the time limit for the validity of the measure, currently set at six months.

Lastly, it does not contemplate a reference to Islam as a “state religion”, a modification that would make Tunisia the first country with a Muslim majority not to include a clause in this sense.

All this has provoked criticism, including from the president of the commission in charge of drafting the text, Sadok Belaid, who warned that the document “does not look anything like the one prepared”, while warning of “an imminent danger” before “too great” powers granted to the president.

Ennahda and other parties have opted for a boycott, while around 30 human rights organizations have indicated that the referendum is really about Saied’s authority, since “the results are known in advance and have no legitimacy”.

The Venice Commission, a consultative body of the Council of Europe, has added to the criticism, which at the end of May pointed out that the presidential decrees approved since July 2021 “are not compatible with the Constitution”, so “it is not realistic to celebrate a referendum in a credible or legitimate way”.

“The commission considers that before any constitutional referendum, legislative elections should be organized as soon as possible to restore parliamentary power, which has disappeared since the suspension and subsequent dissolution of the Assembly of People’s Representatives,” he said.

The International Commission of Jurists (ICJ) expressed itself in this line, whose director for the Middle East and North Africa, Said Benarbia, stated that “it is a Constitution prepared by the president and for the president”.

Despite all this, Saied has stressed that it does not pose a risk to the rights and freedoms of the population, for which he has encouraged citizens to vote ‘yes’, on a path forward that threatens to further raise tensions policies in the country, hit hard by an economic and social crisis.

Free Fire OB35: use these stats to make more headshots after update