Tower of Fantasy: how to get the Voyager Thruster and the rest of the pieces 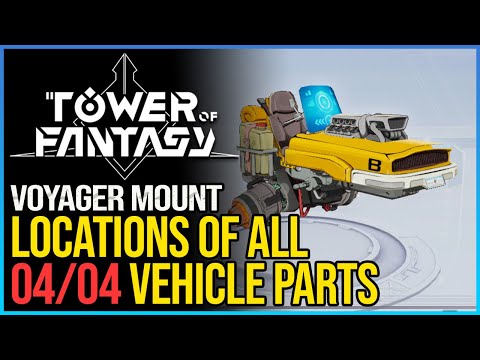 As you explore the open world in Tower of Fantasy, getting from one place to another can be a difficult task, especially if there are not so many vehicles available. Fortunately, some transports are faster than others and some are easier to obtain.

The Voyager is one of many vehicles of Tower of Fantasy which can be unlocked at the beginning of the game. Travelers must collect various parts and put them together to get said vehicles. Here we tell you where to find the Voyager Thruster, one of the most difficult parts to find.

To get the Voyager Thruster on Tower of Fantasy, players must seek out and defeat the Four Powers in Navia until one of them drops the booster. However, there is a catch, as the probability of the Voyager Thruster dropping is extremely low. This means Wanderers can get it right away if they’re really lucky, or it can take hours of effort.

To get to Smoli of the Four Powers, players need to head to Spacerift: Raincaller Island in Navia and then head south. They will then need to climb the small slope and continue east to find Smoli.

TOWER OF FANTASY | How to find Voyager parts

okka of Four Powers is right next to Smoli. From the last location, players must proceed south past the group of enemies to fight okka.

The Wanderers then must travel to the same space rift, this time using the Jetpack relic in Tower of Fantasy to slide down and onto an oil rig. Here it will be waiting for you Hethlu.

the last one is Sendyrs, which you can get to by fast traveling to the Navia Omnium Tower and then flying southwest to the coast. There is a large horde of enemies in this camp, so players need to make sure they are prepared.

If all four are defeated and the Voyager Thruster was not obtained, players will need to return to the first Spacerift and repeat the process.