Three suspected separatist militants were killed this Friday in clashes with Thai military forces in the Narathiwat region.

The clash occurred around 9:00 am (local time), when members of the security forces surrounded several shops where the militants were believed to be hiding in a mountainous area of ​​Ban Da Hong, ThaiPBS Thai public television reported.

The military urged the suspects to turn themselves in, but they refused and opened fire. When the situation calmed down after a shootout, security forces found three bodies at the scene.

In the operation, weapons and camping material used by the militiamen have been seized. 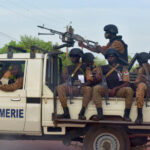