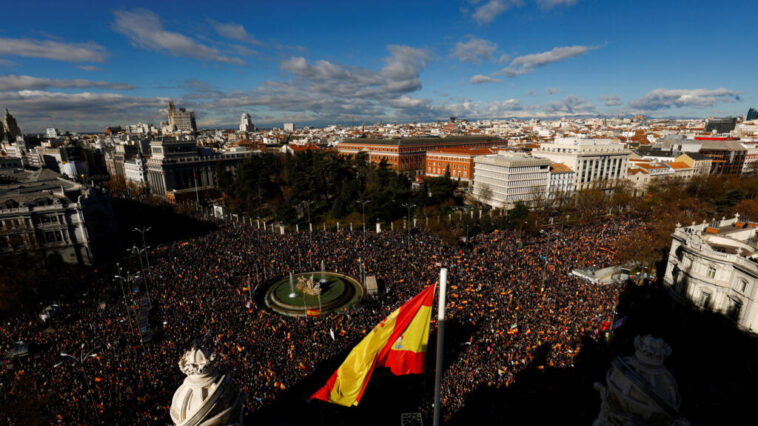 The call for the demonstration came from the Popular Party, the far-right Vox, Ciudadanos and various conservative associations. The head of the Spanish Government described them as “nostalgic” who want a “uniform Spain, and therefore exclusive”.

At least 30,000 people gathered in the central Plaza de Cibeles in Madrid, according to official figures, to demonstrate against the government headed by the leader of the Spanish Socialist Workers’ Party, Pedro Sánchez. The organizers raise the number of attendees to 500,000.

The protest was called by various conservative associations and the far-right VOX parties, as well as Ciudadanos and the opposition PP, Partido Popular. There were discontents who displayed messages such as “liar”, referring to the head of the Executive, while others yelled “traitor” or called for the “resignation” of the ministerial train.

Today tens of thousands of people have taken to the streets to say that not everything goes.

Enough of this arrogant and incompetent government weakening our democracy and our constitution. pic.twitter.com/Hsj2PTvpdR


The opinions of those present varied according to their point of view. Josefina Ribagorda, a 60-year-old businesswoman, stated that it was necessary to be there to “say enough is enough”. “The important thing is that we get out of this economic crisis that we have so important, and that money is not spent on such superfluous things and that the Spanish do not care about either,” she emphasized.

For her part, another attendee, Alicia Caballero, sees the commitment to be present in the show of rejection of the Government, more than for the economic issue, “it is the issue of democracy, the integrity of our country.” A nod to the pacts of the country’s leadership with separatist parties or the liberation of the Catalan separatists.

Among the speakers was the leader of VOX, Santiago Abascal, a former presidential candidate. According to him, “the Spanish government had trampled on the Constitution by locking up all Spaniards”, in clear reference to the measures against the coronavirus. Some representatives of the Popular Party also attended, but not members of its leadership.

Some wanted a broken Spain. Others want a uniform Spain.

And between them are the majority of Spaniards, who want coexistence in a united and diverse Spain. pic.twitter.com/4vEwvHob8G


Pedro Sánchez’s reactions did not wait. The Spanish leader described as “nostalgic” those who met in Madrid. According to Sánchez, they are looking for a “uniform Spain, and therefore exclusive”. The statements were made in the context of a rally held in Valladolid.

With EFE and Reuters