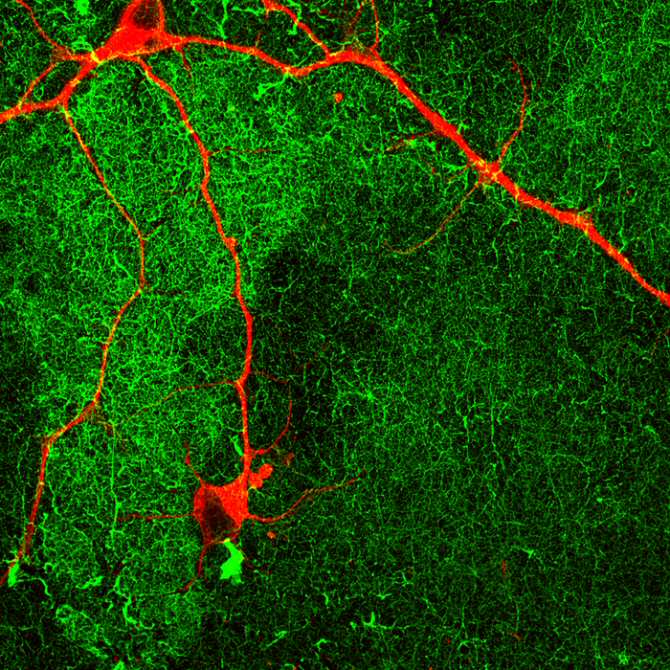 “In this project we have developed a new synthetic matrix that mimics different aspects of the extracellular matrix of the mammalian spinal cord, including topography, chemical composition and, above all, high molecular dynamism. This last characteristic had never been tested due to the high technical complexity required to analyze it, and it seems to be very important for regulating multiple functions of human neurons in vitro, including adhesion, migration, survival, and functional maturation,” he details. Professor Alberto Ortega, from the Department of Pathology and Experimental Therapeutics of the UB.

“These matrices can help to resolve historical limitations for modeling neurodegenerative diseases from human neurons derived from stem cells, since these systems normally present limited levels of maturation that do not go beyond the fetal and infant phases”, points out the UB researcher .

Zaida Álvarez indicates that this is the first time “that it has been possible to mature neurons derived from human iPSCs with a synthetic matrix.” “This platform -explains the researcher- will allow laboratories to have mature human neurons to study multiple neurological diseases and develop new therapies”.

Until now, it had been possible to generate neurons from induced pluripotent stem cells, but these neurons presented an insufficient degree of functional maturity, similar to that of neurons in early stages of development. This limited their ability to investigate neurodegenerative diseases, since it is adult neurons that undergo degenerative processes. The inefficient maturation of neurons differentiated from iPSCs was due, in part, to the lack of signals found in the neurons’ environment, the extracellular matrix.

For the first time, it has been possible to mature neurons derived from human iPSCs with a synthetic matrix. (Image: Northwestern University)

The extracellular matrix is ​​essential for cell development in the laboratory, as it provides structural support, regulates cell signaling and differentiation, maintains cell integrity, and provides a suitable environment for cell growth. To recreate the extracellular matrix and achieve maturation and functionality similar to those of neurons in the nervous system under physiological conditions, the researchers used so-called dancing molecules, a revolutionary technique introduced last year by Zaida Álvarez and Samuel I. Stupp, professor at Northwestern University.

The first step was to differentiate human iPSCs into motor and cortical neurons to later place them on nanofibers composed of dancing molecules. Thus, the experts observed that the signaling and branching capacity of the neurons had improved, which allowed them to generate better synaptic contacts with each other.

The researchers believe that by advancing the age of neurons in cell cultures, experiments may be improved to better understand late-onset diseases. “Having mature neurons in the laboratory is essential to advance in the understanding of neurodegenerative diseases, such as Alzheimer’s disease, Parkinson’s disease or amyotrophic lateral sclerosis (ALS), and in the development of effective and safe therapies”, comments Alberto Ortega .

To grow the mature neurons, the researchers used nanofibers composed of dancing molecules, a material that Zaida Álvarez developed in Stupp’s lab as a potential treatment for acute spinal cord injuries. In previous research published in the academic journal Science, Zaida Álvarez discovered how to change the movement of molecules so that they can more efficiently find and connect to cell receptors that are in constant motion.

“We think this works because the receptors move very fast on the cell membrane and the signaling molecules in our scaffolds also move very fast,” explains Samuel I. Stupp, Director of the SQI (Simpson Querrey Institute for BioNanotechnology) and Distinguished Professor Severo Ochoa at the IBEC.

As part of the research, they took skin cells from an ALS patient and turned them into patient-specific motor neurons, the cell type affected in this neurodegenerative disease. These neurons were cultured for two months on the synthetic materials to develop characteristics of the ALS disease.

“Not only has this provided a new window to study ALS, but this system can also be used to study and test potential therapies in other neurological diseases,” says Evangelos Kiskinis, professor of neurology and neuroscience at the Feinberg School of Medicine in Northwestern University and a Robertson researcher at the NYSCF (New York Stem Cell Foundation).

Thanks to the synthetic material, these highly functional neurons could be transplanted into patients with loss of neurons – due to injury or disease – which could restore lost cognition or sensations. As the initial cells could come from the same patient, the derived and transplanted neurons would not generate rejection.

Kohei Sato, a researcher at the Faculty of Biological Sciences and Technology of the Tokyo Institute of Technology in Japan, and Elisabeth Engel, principal investigator of the IBEC Biomaterials for Regenerative Therapies group, also collaborated on the study.

The study is titled “Artificial extracellular matrix scaffolds of mobile molecules enhance maturation of human stem cell-derived neurons.” And it has been published in the academic journal Cell Stem Cell. (Source: UB)