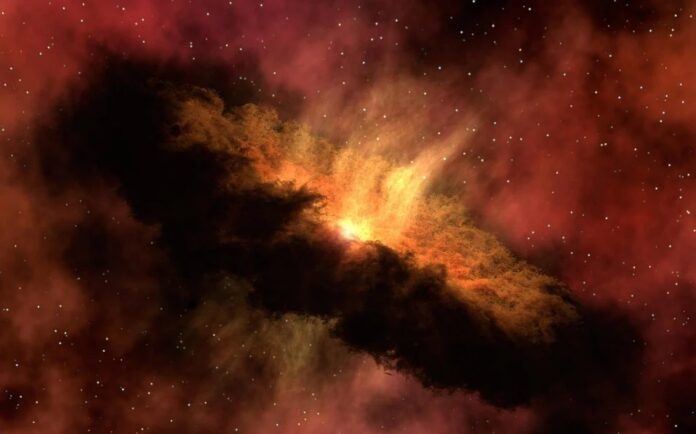 A team of Finnish researchers has found strong evidence for the existence of a type of matter that until now had been merely theoretical.

Is about “exotic matter of quark» and is found inside the largest neutron stars that exist. The finding, which has just been published in «Nature Physics»was produced by combining recent results from particle and nuclear physics studies with measurements of gravitational waves generated precisely by this class of stellar corpses.

All matter around us is made up of atoms, with dense nuclei at their centers made of protons and neutrons. Atomic nuclei are surrounded by a cloud of electrons negatively charged, and in the vast majority of materials there is a considerable distance between one atom and the next.

But that’s just the “normal” state of matter. In extreme conditions, gravity can pull atoms closer together to the point of losing their electrons. And even further, even to get the nuclei themselves, now naked, to come together to form an extraordinarily dense matter.

One of the most extreme places in the Universe

The truth is that there are few places in the Universe more extreme than neutron stars. It is authentic “stellar corpses” They form when a star that was originally several times larger than the Sun runs out of fuel, which allows it to continue burning.

The energy generated by nuclear fusion in the cores of stars is the only force capable of opposing the gravitational pressure, which tries to compress them. And when the fuel that keeps the fusion furnace burning runs out, nothing can oppose gravity, which begins to crush the star.

In the end, what was a burning ball of gas with a radius of millions of kilometers (the radius of the giant Betelgeuse, for example, is 617 million km) is crushed and reduced to a dense ball of super-compressed matter about ten kilometers. A teaspoon full of that stuff would weigh more than Mount Everest.

An atomic nucleus of tens of kilometers of matter

Scientists know that inside neutron stars, atomic matter collapses into immensely dense nuclear matter, in which protons and neutrons are so close together that the entire star, or what’s left of it, could be considered a single huge star. atomic nucleus.

Many, however, had spent decades wondering if in the deepest interior of neutron stars the matter could collapse even moreto a hypothetical and exotic state called “matter of quark», in which the protons and neutrons themselves have been divided into their fundamental pieces (each one is made up of three quarks) forming an ultra-dense soup in which not even the particles that made up the atomic nuclei can exist anymore. And now, a team of researchers from the University of Helsinki says that the answer to that question is a resounding yes.

«Confirm the existence of quark nuclei inside neutron stars -ensures Alexis Vuorinenone of the authors of the article It has been one of the most important goals in neutron star physics since this possibility was first raised about 40 years ago.”.

A totally new approach to the matter

To date, there are no large-scale computer simulations capable of determining the fate of nuclear matter inside a neutron star. But still, the Finnish researchers managed to get results thanks to a completely new approach to the problem.

In fact, they found that by combining recent findings on theoretical particle and nuclear physics with observational measurements, it was possible to deduce the characteristics and identity of matter that resides at the heart of neutron stars. Or at least in the most stable and massive.

However, Vuorinen points out that there are still many uncertainties associated with the exact structure of neutron stars. Nobody, in fact, has been able to see the inside of any until now.

What then does the statement that quark matter has been discovered mean? According to Vuorinen “There is still a small but not zero chance that neutron stars are made of just normal nuclear matter. However, what we have managed to do is quantify the conditions that would be necessary for this scenario to occur. In short, the behavior of dense (but conventional) nuclear matter would have to be truly peculiar. For example, the speed of sound would need to almost reach the speed of light..

The message of gravitational waves

One of the key factors that contributed to the new finding was the appearance of the results of two recent observational astrophysics works: the measurement of gravitational waves generated by the merger of two neutron stars and the detection of very massive neutron stars, with masses close to two solar masses.

In the fall of 2017, in fact, the LIGO and Virgo observatories detected, for the first time, gravitational waves generated by two neutron stars that were merging.

That observation set a rigorous upper limit for a quantity called “tidal deformability,” which measures how sensitive a star’s structure can be to the gravitational field of an orbiting companion. that result was later used to obtain an upper bound on the radii of those two stars of colliding neutrons, which turned out to be about 13 km.

Similarly, and although the first observation of a neutron star dates back to 1967, precise measurements of its masses have not been possible until the last two decades.

The equation of state of matter

In the new analysis, those astrophysical observations were combined with cutting-edge theoretical results on particle and nuclear physics.

This allowed us to derive an accurate prediction of what is known as «the equation of state for stellar neutron matter», which refers to the relationship between its pressure and energy density. An integral component in this process was a well-known result from general relativity, which relates the equation of state to a relationship between the possible values ​​of the radii and masses of neutron stars.

Since that first detection in 2017, several neutron star mergers have already been observed, and LIGO and Virgo have quickly become an essential part of investigating these stellar corpses.

And it is precisely this rapid accumulation of new information that has made it possible to improve the precision of the Finnish team’s findings, confirming the existence of quark matter inside neutron stars.

According to the researchers, new observations planned for the coming months and years they will further refine the results and eliminate or greatly reduce current uncertainties.

“There are good reasons to believe -concludes Vuorinen- that the golden age of gravitational-wave astrophysics is only just beginning, and that we will soon witness many more such leaps in our understanding of nature.”.