If you watched the latest episode of The Last of Us from HBO, what caught your attention the most is the last scene. The sequence differs greatly from the original game and was so disturbing that many fans were shocked and some were even unhappy with the addition. Why did the series take this liberty? Creative leaders explain it.

SPOILER: next we will talk about an important part that marks the narrative of The Last of Usso if you have not seen the episode of the series or have not played the title, we invite you to stop reading.

The moment we are talking about clearly is the scene in which an infected person approaches Tess and gives her a ‘kiss’ shortly before Joel’s colleague blew up the place.

According to Craig Mazin, responsible for the HBO adaptation, at some point in development they wondered why the infected have to be violent: “We wanted an opportunity to show a different outcome of getting infected that was not one of mere violence or horror, but a morbid kind of community”.

There is already a lot of horror around the infected and the infection process itself, so instead of filming as horror happens, they chose to record it in “the most beautiful” and intimate way, according to Druckmann, creator of the IP. , although in the end it was more horrifying to communicate everything that was going through Tess’s mind.

The Last of Us shows romantic side of the infected

Unnoticed by many, the issue of love and the way in which it works is addressed, “because fungi love too”, according to Mazin, in the sense that they reproduce to make more of themselves, just like humans. : “That’s what we do when we love each other. Many of us make more of ourselves. That’s how species spread.”

“Some of us do it a lot,” Druckmann added jokingly.

In an interview with VarietyMazin commented that it seems unpleasant as we reproduce and even creepy and violating, but in the case of Tess and the infected it is even tender and not at all violent because she is not fighting when he “graciously shares himself” through the tendrils that they come out of his mouth.

In case you missed it: Ellie’s mom was going to appear in the original game as DLC.

It is important to remember that when Tess explained to Joel how the infected communicate, she mentioned that “they are more connected than you think”. When Tess meets the horde of infected she was already infected, so they feel that she is already one of them.

“That’s much more interesting that Phaedra showed up and shot him,” Mazin added, speaking that despite these differences, in the end Tess’s decision remained true to the game: sacrifice herself to buy time.

“Because we’re cruel to the characters we love so much, it felt like I knew it was over, but then the igniter didn’t work and we pushed her to the edge of horror before we could give her an outlet,” Druckmann expressed.

What did you think of the scene? Tell us in the comments. 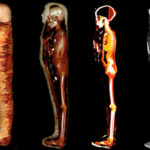