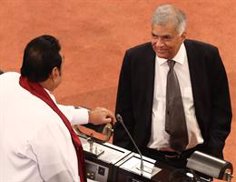 The United Nations coordinator in Sri Lanka, Hanaa Singer Hamdy, said Thursday that the organization has recognized that the transfer of power in Sri Lanka has been carried out “in accordance with the Constitution” after the inauguration of Ranil Wickremesinghe as president.

“Now is the time for all parties to engage in an inclusive and exhaustive consultation process to resolve the current economic crisis and the problems facing the population of the island,” he asserted in a message broadcast through your Twitter account.

For his part, Wickremesinghe has promised that he will take action to deal with the demonstrations and quell the protests as soon as possible. “If you try to undermine the government, take over the offices of the president and the prime minister, then it’s not democracy. This is against the law,” he asserted.

“We will deal with these people forcefully and in accordance with the provisions of the law. We will not allow a minority of protesters who demand a change in the political system to suppress the aspirations of a silenced majority,” he asserted.

The 73-year-old Ceylonese politician became the eighth president of the country on Thursday after an act at the Parliament facilities before the head of the Supreme Court, Jayantha Jayasuriya, as reported by the Ceylonese newspaper ‘Daily Mirror’.

The new president, who has been in office on an interim basis since Gotabaya Rajapaksa’s flight last week from the country, reached out on Wednesday to opposition leader Sajith Premadasa and other opposition parties to “work together.”

He is expected to name Parliament Speaker Dinesh Gunawardena as the country’s new prime minister, according to sources familiar with the matter.