The Taliban shoot out a women’s demonstration in Kabul 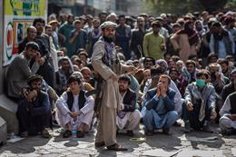 The Taliban pushed and shot into the air this Saturday a demonstration of dozens of women marching through the streets of the Afghan capital, Kabul, shouting “Food, work and freedom.”

“We are trapped in a pharmacy, they have locked us up here,” lamented one of the participants in a video verified by the DPA news agency.

Some of the protesters would have been injured during the Taliban repression of the march, according to estimates by the NGO Afghan Peace Watch on its Twitter account.

The protest had been called on the occasion of the proximity of the first anniversary of the Taliban reconquest of the country that culminated on August 15, 2021 with the fall of the capital.

Since then, the Taliban have been accused of restricting political freedoms and human rights throughout the country, as well as leading a campaign of oppression and discrimination against minorities and vulnerable populations.

The fundamentalists have responded with violence to all the demonstrations carried out by women’s groups since their return to power, such as the one that took place in May to denounce the closure of secondary schools for girls in the Central Asian country.