The state of emergency decreed on Saturday in Peru took effect this Sunday, January 15, in the regions of Lima, Cuzco, Puno, Callao and in three other provinces. The measure authorizes the Army to intervene to maintain order and suspends various constitutional rights. The Government of Dina Boluarte decided to implement it to control the social protests that have not stopped since December and have resulted in almost 50 deaths.

On Saturday, the Executive of Peru published a decree that extends to the capital Lima and several regions the state of emergency that came into force on December 15 throughout the national territory.

“During the States of Emergency … the constitutional rights related to the inviolability of the home, freedom of transit through the national territory, freedom of assembly and personal freedom and security are suspended,” says the decree.

According to the document, the President of the Republic can decree a state of emergency in case of “disturbance of peace or internal order, catastrophe or serious circumstances that affect the life of the nation.”

The National Police of Peru will have the support of the Armed Forces to maintain order and social mobilization will be prohibited for 10 days between 8:00 p.m. and 4:00 a.m.

With these measures, the president hopes to control the protests of those calling for her resignation, the closure of Congress and elections for 2023. The protesters were still in the streets of Lima on Saturday.

In addition, more than a hundred barricades blocked traffic on Saturday in Lima and in the south, the epicenter of the protest. However, the authorities reopened the international airport of Cusco, important for tourism in the country.

The protests broke out after the dismissal and arrest, on December 7, of President Pedro Castillo, accused of a failed coup d’état when trying to dissolve Parliament. Former Vice President Dina Boluarte succeeded him in accordance with the Constitution.

Excessive use of force

Since the protests started, 49 people have lost their lives, 21 of them in the last week.

On Friday, the president said she regretted the number of deaths and apologized for the events.

“I cannot reiterate my regret for the deaths of Peruvians in the protests, both our civilian compatriots and the valuable policeman who unfortunately lost his life. I apologize for this situation and for what has not been done to prevent these tragic events. Boluarte said.

However, the president repeated that she will not resign, as requested by the thousands of protesters.

“Some voices from violent and radical groups demand my resignation leading people to chaos, disorder and destruction. I tell them responsibly that I will not resign. My commitment is with Peru and not with this small group that harms our country “, declared the president.

According to a survey by the Institute of Peruvian Studies (IEP) published this Sunday, 58% of Peruvians believe that there were “excesses on the part of the forces of order” in the protests and around 70% disapprove of the performance of the president, Dina Boluarte, and the head of Congress, José Williams. In addition, 60% of those surveyed believe that the protests are “justified” compared to 35% who think otherwise.

The Inter-American Commission on Human Rights (IACHR) ended a three-day fact-finding mission in Peru on Friday. It concluded that there were indications of “excessive use of force” and called for an impartial investigation into the repression of the demonstrations.

Finally, the Prosecutor’s Office opened an investigation for “genocide” against Dina Boluarte and several other senior officials.

With EFE and AFP 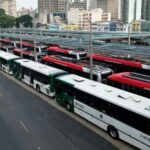