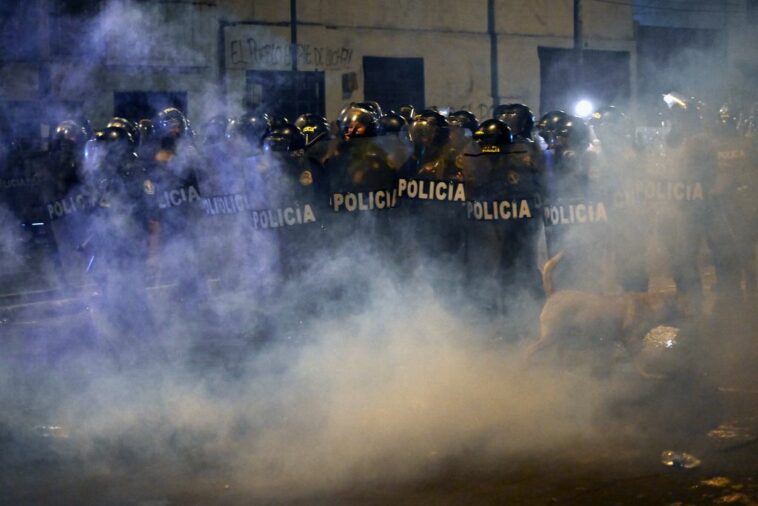 What is happening in Peru? We explain to you in 2 minutes 2:11

( Spanish) –– Peru lived this Friday another intense day of protests at the national level, with mobilizations in at least 47 provinces of the country, according to the Ombudsman’s Office. And the situation in Lima, the capital, turned violent again at night.

The team in the city witnessed how a group of protesters launched fireworks against the police cordon, while the agents responded with tear gas. These confrontations occurred at the height of Abancay and Grau avenues.

A few hours earlier, also captured the moment when hundreds of protesters met the police while trying to reach the center of Lima. “They are confronting us between Peruvian brothers, you are not to blame,” exclaimed some of them.

The protesters began to congregate this Friday afternoon in the Plaza San Martín de Lima, despite the strong police contingent. In fact, 11,800 agents were deployed in the city for this day alone, confirmed Víctor Zanabria, head of the Lima police region.

At the end of the day this Friday, Vicente Romero, Minister of the Interior, confirmed that approximately 3,700 protesters took to the streets of Lima. The official explained that at the national level there were incidents in Cusco, including the takeover of the Antapaccay mining company, also in the Puno region, where protesters tried to take over the Juliaca and Arequipa airports for the second consecutive day.

A total of 417 tourists are immobilized in Machu Pichu, of which 300 are foreigners, according to the Minister of Foreign Trade, Luis Helguero.

For his part, Jorge Chávez, Minister of Defense, once again supported the actions of the police agents to try to control the protesters. He denied that tanks from the Armed Forces are used as tactics to contain the violence. “The vehicles that you have seen and that are in support and protection of our police are multipurpose vehicles whose purpose, I repeat, is to protect the integrity of our National Police in the face of these social conflicts,” Chávez explained.

More than 50 people have died

According to the most recent balance of the Ombudsman’s Office, 54 people have died and 772 people have been injured since the start of the protests on December 7, 2022.

The Ombudsman’s Office also pointed out that the mobilizations and road blockades this Friday are registered in 47 provinces of the country, which is equivalent to 24% of the national territory.

For his part, Christian Salazar, special envoy of the Office of the United Nations High Commissioner for Human Rights, lamented the number of deaths and injuries in the midst of the protest. In this sense, he asked the Government of Peru to investigate these cases to avoid more people being killed.

“We have regretted the deaths and injuries that have occurred. We have asked for information on what the government is doing to prevent these deaths and injuries from happening again, that the cases be well investigated. And we are here to support and strengthen capacities in respect for human rights in Peru,” Salazar said upon leaving the meeting he held with the president of the Council of Ministers Alberto Otárola.

The meeting, in which Defense Minister Jorge Chávez also participated, took place on Friday morning at the headquarters of the Presidency of the Council of Ministers at the invitation of the Peruvian government. 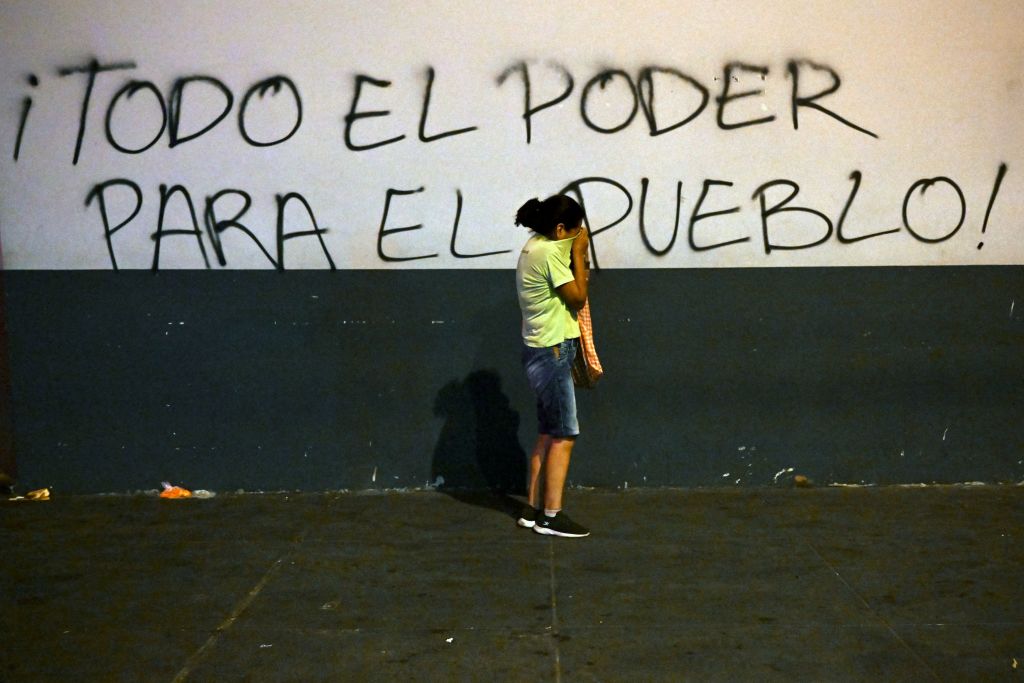 A woman covers herself from tear gas in Lima. (Credit: ERNESTO BENAVIDES/AFP via Getty Images)

The Government of Peru declared a state of emergency for 30 days in the regions of Amazonas, La Libertad and Tacna this Friday, in the middle of the day of protests, the Ministry of the Interior said in a statement.

The state of emergency remains in force in the regions of Lima, Cusco, Puno and the constitutional province of Callao, regions where it had been previously declared.

Protesters set fire to a border care center with Bolivia

The Peruvian Foreign Ministry confirmed this Friday afternoon that a group of protesters set fire to the binational border care center in the town of Desaguadero, on the border with Bolivia. Through its official Twitter account, the Ministry of Foreign Affairs of Peru regretted the facts and said that this act affects commercial transactions between both countries.

“These actions do not coincide with the right to peaceful protest. The affectation of CEBAF Desaguadero harms bilateral trade with Bolivia and threatens the economy of thousands of Puno families,” said the Foreign Ministry. Until now, the Bolivian government has not ruled on the event.

Fire in the center of Lima destroys historic construction

On Thursday night a fire broke out that destroyed a building in the center of Lima, near the area where the protests spread throughout the day. At least 25 trucks and dozens of firefighters were working to put out the fire, TV Peru reported on Thursday. An investigation was opened into the causes of the fire.

This Friday, images from the team in Lima captured the extinction work by the Lima firefighters who continued on the scene.

Lima police condemned the violence in the context of the protests on Thursday, in which security forces fired tear gas at protesters demanding the resignation of President Dina Boluarte. 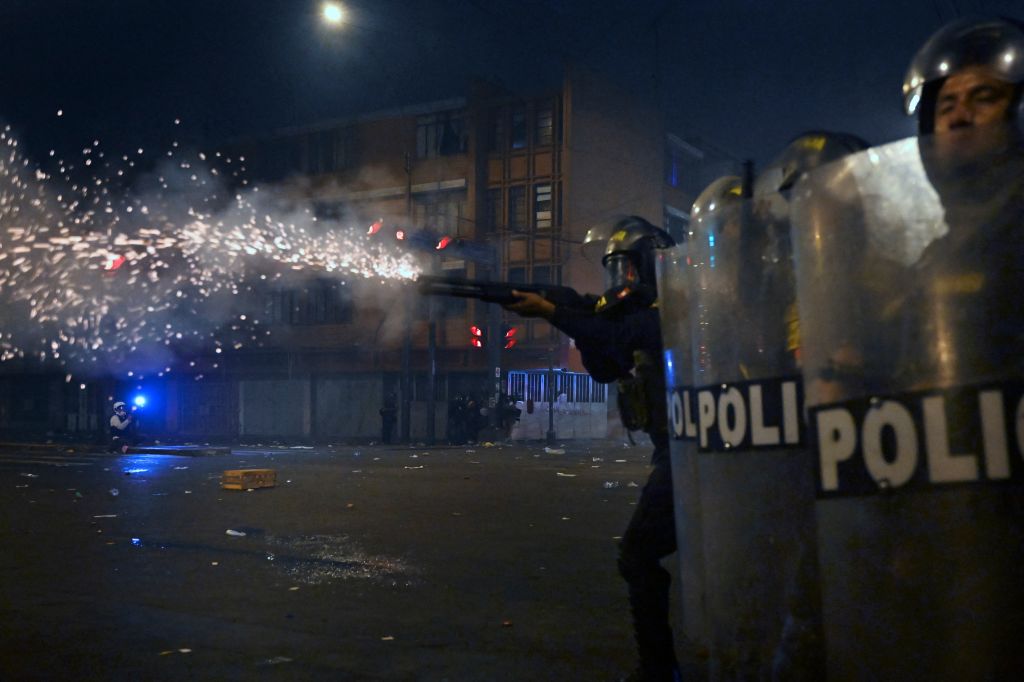 At least three people died during nationwide demonstrations that day, according to the Ombudsman’s Office.

On Thursday night, after a challenging day, President Dina Boluarte gave a message to the nation in which she once again called for a dialogue. “Once again I call for dialogue, for calm to those political leaders who are calling for these protest marches, have a more sincere, more objective, more brotherly look at the country, and let’s talk and dialogue to bring calm, peace, unity and the development of the homeland,” he said.

The advice of a former attorney from Peru for Dina Boluarte 2:03

The president also warned that the acts of violence would not go unpunished and denounced that there was an attempt prepared “in advance” to take over three airports in the interior of the country. “All the rigor of the law will fall on those people who are committing these criminal acts, of vandalism, which we are not going to allow.”

Boluarte focused his message on ensuring that the “situation is under control”. “It is controlled because we know that these gentlemen are not going to cease their purpose of breaking the rule of law,” he said. “We also tell them that we will act with the full weight of the law and we will be and are individualizing these bad citizens who are generating acts of violence,” he added. Boluarte closed his message by saying that his government “is firm and more united than ever.”

This Friday operations resumed at the Alejandro Velasco Astete international airport in Cusco. Through a statement on Twitter, the Ministry of Transport and Communications of Peru reported that more than 40 flights are scheduled.

Members of the National Police and the military will guard the facilities with the aim of “safeguarding the integrity of passengers and members of the aviation community,” the statement explained.

On Thursday, operations at the Cusco, Arequipa and Juliaca airports were canceled due to the entry of protesters.

Elizabeth Plaza contributed to this report. 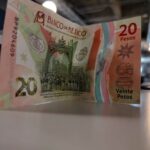