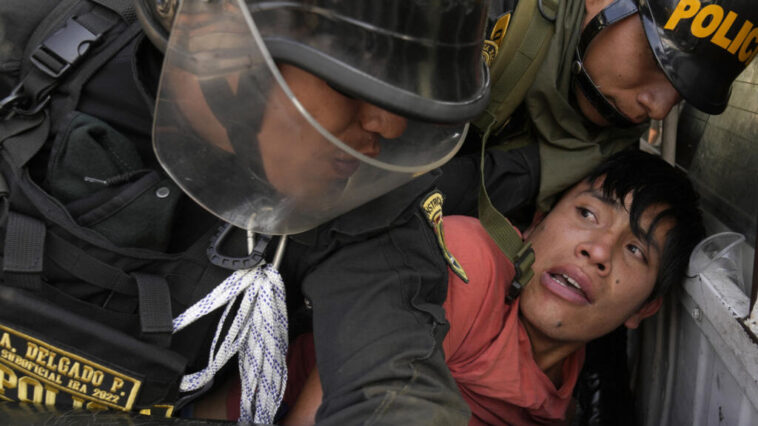 There are 46 deaths from the protests in Peru, and although several regions are smaller, they remain partially blocked. On Saturday the Ministry of Tourism reported that the more than 400 tourists who were stranded near the citadel of Machu Picchu were finally transferred to Cusco. In Lima, the police intervened in the Universidad Mayor de San Marcos and arrested about 200 people.

A new victim was added on Saturday to those killed by the protests in Peru against the government of President Dina Boluarte. This is a protester who had been seriously injured in the Puno region. With his death there are 46 people dead, 45 protesters and a police officer, according to official sources. The wounded number in the hundreds.

The government on Sunday extended the state of emergency for an additional 30 days in the capital Lima and in the regions of Cusco, Callao and Puno. The objective is to stop the protests of a part of the population that demand the resignation of Boluarte and the release of ex-president Pedro Castillo, detained after the failed dissolution of Congress. last December 7th.

The state of emergency allows the government to call on the army to intervene together with the police to maintain order. There are already 25 regions affected by this exceptional regime that will last until mid-February, at least.

About to complete a month of protests, the European Union decided to raise its voice and rejected “the large number of fatalities”. Brussels called on the government and the opposition to “take urgent measures to restore calm”.

In Rome and taking advantage of the traditional Sunday message, Pope Francis declared “I join the Peruvian bishops in saying “No to violence, wherever it comes from, no more deaths”,

The government for its part announced that the 418 tourists who were blocked near the citadel of Machu Picchu were transferred to the capital Cusco. The country’s main tourist attraction will remain closed “until further notice,” the Ministry of Tourism reported.

In Lima, the police entered the National University of San Marcos. Images broadcast on social networks showed how a tank broke the huge fence that protects the educational facility. According to the police some 200 people were arrested, later they were transferred to the Prefecture of Lima. Police intervention was requested by the university authorities. The Ombudsman’s Office denounced that he was not allowed to enter the university during the police intervention.

The detainees face charges of acts against property and disturbance of the peace.

The Mission of the Office of the United Nations High Commissioner that is in the country called on the Peruvian authorities to “ensure legality and proportionality” in the case of the detainees.