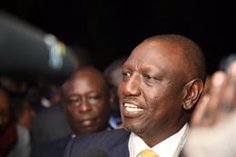 Former Kenyan Prime Minister Raila Odinga begins to take several points ahead of his great rival in the Kenyan presidential elections, Vice President William Ruto, according to the latest official count of the elections collected this Saturday by the Kenyan newspaper ‘The Nation’.

The slow pace of counting votes after Tuesday’s elections has begun to exasperate public opinion. Electoral commission chairman Wafula Chebukati has blamed the delays on party secretaries, who insist on re-examining result forms before adding them to the final result.

“These people cannot behave as if we were doing a forensic analysis,” Chebukati told a news conference.

However, it should be remembered that this process has been designed as a safeguard against accusations of manipulation of previous elections in the African country, characterized by its high level of electoral violence.

More than a thousand people died after the 2007 elections and another hundred in 2017, during the re-election of the outgoing president, Uhuru Kenyatta. Odinga, chosen by Kenyatta for succession, had been leading the polls for days before the elections were held.