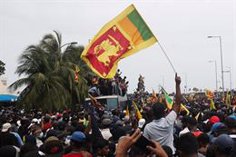 The leader of the Sri Lankan opposition, Sajith Premadasa, has assured this Sunday that his coalition, United People’s Power (Samagi Jana Balawegaya or SJB) has no intention of occupying any ministerial portfolio that the current acting president, Ranil Wreckimesinghe, could offer them. , although he has admitted that he will be open to collaborating with the Government through committees.

Premadasa thus maintains his pulse with the president and former prime minister, whom he considers a mere extension of the Rajapaksa clan that has dominated the country’s politics for years and that ended up being expelled after the popular revolution of July 9, which culminated months of protests by rising fuel prices and family corruption in the Sri Lankan government.

“We are prepared to play a role in the government through committees, but we do not intend to accept ministerial portfolios,” Premadasa declared at a meeting with union leaders held this Sunday.

“The correct way to play a role in government is to participate in parliamentary committees and not accept ministerial portfolios or enjoy the benefits that come with them,” he added during the meeting, reported by the Sri Lankan newspaper ‘Daily Mirror’.

At the meeting, Premadasa insisted that “civil organizations, trade unions and other organizations must reach an agreement on a common program to build the nation.”

In addition, the opposition leader has declared his intention to convene a new “national council” for next Tuesday in which, accompanied by unions and other organizations, he will configure a program of proposals that he will end up presenting to the national Parliament.

Premadasa, who has refused to run for the Presidency, has once again reiterated that he has no intention of backing Wreckimesinghe and has opted instead to support Deputy Dullas Alahapperuma, paradoxically from the party of the fled President Gotabaya Rajapaksa, in future elections. , given the suspicion that the current acting president arouses in him.

Free Fire OB35: use these stats to make more headshots after update