The International Court of Justice (ICJ), the main judicial body of the United Nations, has confirmed receipt of the request initially made by the Palestinian government to investigate the situation of the Israeli presence in the occupied territories and issue an “advisory” opinion. about.

On its website, the ICJ takes note of the petition, transmitted through the UN General Assembly by resolution, entitled “Israeli Practices Affecting Human Rights in the Occupied Palestinian Territories, including East Jerusalem.”

In the resolution, approved in January with 87 votes in favor, 26 against and 53 abstentions, the UN asked the international court to express its opinion and mediate in the Israeli-Palestinian conflict.

The Assembly requests, in accordance with article 96 of the United Nations Charter, an opinion from the ICJ on two specific questions: what are the legal consequences of the “constant Israeli violation of the Palestinian right to self-determination” and in what way the Israel’s policies and practices “affect the legal status of the occupation,” as well as the resulting consequences for the United Nations and all its member states.

Likewise, the text says that the ICJ must investigate Israeli measures “aimed at altering the demographic composition, character and status of the Holy City of Jerusalem”, as well as “discriminatory legislation and measures” against the Palestinian people.

The court last issued an opinion on the Israeli-Palestinian conflict in 2004, when the General Assembly asked it to rule on the legality of the separation wall with the West Bank.

The court ruled that the separation barrier was “contrary to international law” and called on the country to immediately halt construction. Israel has since ignored the decision, arguing that the barrier was a security measure intended to prevent Palestinian attackers from reaching Israeli cities. 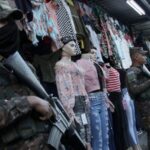