The symbol made by scientists, which shows an estimate of how close humanity is to extinction, came within 90 seconds of the decisive hour this year, the closest it has come since its creation in 1947. The war in Ukraine and the advance of climate change are among the factors that led to this conclusion.

The ‘Doomsday Clock’ was close to striking midnight. This Tuesday, the bulletin of the Atomic Scientists, the organization that has manipulated the Clock since it was created in 1947, reported that the symbolic mechanism that estimates the probability for humanity to cease to exist was only 90 seconds away from the final time, which closer than it’s ever been.

As explained by the president of the scientific entity, Rachen Bronson, this decision is a consequence of “the growing dangers of the war in Ukraine”, being the first time in three years that the hands of the clock have been modified, which were 100 seconds away. since midnight 2020.

“If you look at what’s happening in Ukraine, the weather disasters…it’s very hard to say that things are getting better,” said Daniel Holz, the board’s co-chair. In addition, he admitted that they would like to “very much turn back the clock”, but they have “to respond to what is happening in the world”.

Beyond climate change, the reasons center on the Russian-Ukrainian conflict and the consequences that may occur if the war continues to escalate. Specifically, in the danger of the use of nuclear weapons, something that President Vladimir Putin has insinuated, and in the accusations of biological bombs and the misinformation that surrounds this last matter.

“If many Russians don’t even believe there is a war, misinformation is very worrying because they don’t put the appropriate pressure on their leaders,” he said.

In addition to the war scenario in Eastern Europe, the entity also had other pessimistic scenarios, such as the possibility of the appearance of more pandemics after Covid-19 or the absence of a nuclear agreement with Iran.

This is the worst situation since 1953, when the clock struck two seconds to midnight at one of the most worrying moments of the Cold War, when the first tests of thermonuclear weapons were carried out.

This ‘Doomsday Clock’ was devised by a group of scientists, most of them members of the ‘Manhattan’ project, which ended with the construction of the atomic bomb, but who were opposed to using it against people.

The decision on the position of the needles involves the board created by Albert Einstein, the Science and Safety group of the Bulletin of Atomic Scientists, and a block of sponsors that includes eleven Nobel laureates. In addition to nuclear dangers, since 2007, they also take global warming and the climate crisis into consideration as risk factors. 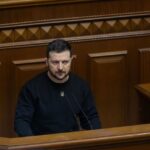