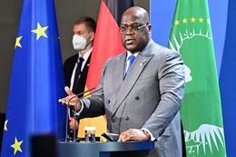 The Government of the Democratic Republic of the Congo (DRC) has demanded the expulsion of the spokesman for the United Nations Mission in the Democratic Republic of the Congo (MONUSCO), Mathias Gillmann, amid tensions over the death of more than 30 people during the protests of the last two weeks against the deployment of the ‘blue helmets’ in the country.

The Congolese Deputy Prime Minister in charge of Foreign Affairs, Christophe Lutundula, has sent a note to MONUSCO to explain the request, which he has linked to the “regrettable increase in tensions between the civilian population and MONUSCO, particularly in North Kivu” since Gillmann’s “indelicate and ill-timed statements” about the situation.

“The Government of the DRC considers that the presence of this official on national territory will not favor a climate of mutual trust and tranquility that is essential between the Congolese institutions and MONUSCO, not only for the better performance of the mandate entrusted to the latter by the Council of Security of the UN, but also to develop the transition plan for the final withdrawal (of the ‘blue helmets’) from the DRC by 2024, as agreed,” he said.

In this sense, Lutundula has invited the UN mission to take all necessary measures so that the MONUSCO spokesman leaves the territory of the African country and has demanded that “full attention” be given to this matter in order to achieve a solution acceptable, as reported by the Congolese news portal 7sur7.

The president of the DRC, Félix Tshisekedi, called on the government on Tuesday to “re-evaluate” the MONUSCO withdrawal plan after the death of 36 people in the protests, including four members of the UN mission, after the secretary general of the international organization, António Guterres, was “outraged” after ‘blue helmets’ shot dead two people in an incident in the town of Kasindi, on the border with Uganda.

Remedy Entertainment works on 5 games; 1 will arrive later than expected