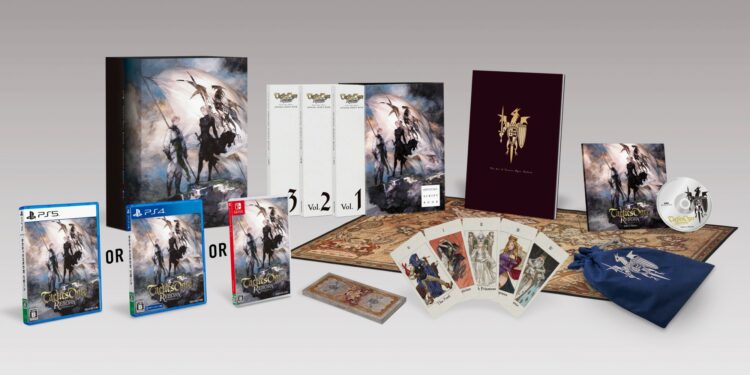 32
SHARES
230
VIEWS
Square Enix has confirmed one of the worst kept secrets of recent months. This is Tactics Ogre: Reborn, a “reimagined edition” of the strategy RPG that before being officially announced with its respective trailer and details appeared on the leaked Nvidia list and was seen on the PlayStation Store a few days ago. We also have a release date that places the title’s arrival on November 11 on PlayStation 4, PlayStation 5, Nintendo Switch and PC via Steam.

Tactics Ogre is a classic RPG strategy adventure brought to life with remastered high-definition graphics “that both enhance and respect the distinctive visual style of the original,” says Square Enix. There are also a number of general system improvements, including a redesign of the combat system, which is now faster, adjustments to the level management system, which becomes per unit, the AI ​​has been updated to adapt to Battlefield function and interface is improved and simplified.

Regarding the audio, voices have been added for the scenes in English and Japanese, while the sound effects have gone through a remastering process. Furthermore, the soundtrack has not only been re-recorded with orchestra by Hitoshi Sakimoto, the original composer, but also includes new pieces. For the clueless, Tactics Ogre: Reborn is an improved version of Tactics Ogre: Let Us Cling Together (2010) on PSP, which in turn is a remake from the SNES game of the same name released in 1995.

The story of Tactics Ogre: Reborn is set in the Valerian Islands of the Obero Sea. After many years of conflict, a man named Dorgalua Oberyth rises up to end it. Known as the Dynasty King, he brought peace and prosperity to Valeria for half a century, but after his death a civil war erupts, plunging the islands into a bloody power struggle between three warring factions. In Tactics Ogre: Reborn, players follow the story of a young man, Denam Pavel, caught in the thick of the war.

On the battlefield, players must control and strategically use a turn-based combat system to gain an advantage over the enemy. As you progress, you’ll be able to recruit more team members, try out different classes, weapons, spells, and abilities, and make decisions at certain points in the story that will shape how events unfold.

Tactics Ogre: Reborn can now be reserved in its digital format for PS5, PS4, Nintendo Switch and PC through Steam, and in physical format for consoles for 49.99 euros. In Japan the title can be purchased through a collector’s edition that accompanies the game with a deck of tarot cards, a storage bag, a mat, the soundtrack, the art book and three volumes with the script.

Chrissy Teigen and John Legend are expecting another baby