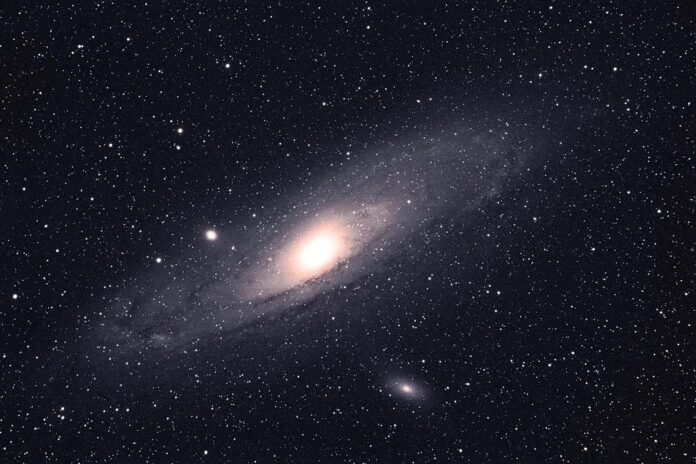 Astronomers have long suspected that the Milky Wayour galaxy, and its closest neighbor, Andromeda, they will collide irremediably. A brutal collision that will forever change the appearance of the sky.

But perhaps it is different from how it was believed until now. From the data of satellite Gaia of the European Space Agency (ESA), researchers have concluded that our neighbor it will touch us sideways instead of colliding head-on.

Furthermore, this will not happen in 3.9 billion years, as was supposed, but in 4.5 billion: about 600 million years later than expected. The Universe grants us a little more time.

The Local Group is a vast collection of galaxies, including our Milky Way, Andromeda (M31) and the Triangulum (M33), which make up most of the group’s mass. The two disk-shaped spiral galaxies are between 2.5 and 3 million light-years away from us, and they are close enough to each other to interact.

As the researchers explain in the journal “The AstrophysicalJournal”the orbits of these two neighboring galaxies have been changing over time.

There were two possibilities: either the Triangulum galaxy is in an incredibly long 6 billion year orbit around Andromeda but has fallen into it in the past, or this is the first time it has. Each scenario reflects a different orbital path, which would imply a different formation history and future for each galaxy.

the movement of the stars

While the Hubble Space Telescope has obtained the sharpest view ever of Andromeda and the Triangle, Gaia is fulfilling another mission: to measure the individual position and movement of many of its stars with unprecedented precision.

“We have scoured the Gaia data and identified thousands of stars in the two galaxies, and then studied their movement within them,” says Mark Farda, of the Space Telescope Science Institute (STScI) in Baltimore (United States) and co-author of the study.

“Although Gaia’s main goal is to study the Milky Way, it is powerful enough to detect especially bright and massive stars in nearby star-forming regions, even in galaxies beyond our own,” Add.

The stellar motions measured by Gaia not only show the movement of these galaxies through space, but also how each of them rotates on its own axis. A century ago, when astronomers began to understand the nature of galaxies, measuring their rotation was impossible with the telescopes available at the time.

Now for the first time researchers have been able to measure the rotation of M31 and M33 in the sky. ‘Astronomers used to see galaxies as clustered worlds that could not constitute independent ‘islands’, but now we know that this is not the case. We have needed 100 years and Gaia to be able to measure the tiny real speed of rotation of our galactic neighbor, M31. This will help us to better understand the nature of galaxies»says Roeland van der Marel, of the Space Telescope Science Institute (STScI) in Baltimore (United States), and lead author of the study from which this information emerges.

By combining existing observations with the new Gaia data release, researchers have been able to determine the movement of Andromeda and the Triangle through spaceas well as calculate the orbital path of each galaxy both backwards and forwards in time for billions of years.

“The velocities found show that M33 cannot be found in a long orbit around M31,” warns Ekta Patel of the University of Arizona (United States) and co-author of the study. All of our models imply that M33 must be starting to drop into M31.”

For that reason, even though the Milky Way and Andromeda are still destined to collide and mergeit is probable that both the moment and the degree of destruction of this interaction different than expected.

Andromeda’s motion differs somewhat from previous estimates, so according to the study’s conclusions, it is quite possible that this galaxy glancing at the Milky Way, instead of colliding head-on. This will happen in 4.5 billion years, about 600 million years later than expected.

Timo Prusti, ESA Gaia Project Scientist, believes this finding is crucial to our understanding of the evolution and interaction of galaxies.

“We have seen unusual phenomena in both M31 and M33, such as irregular shapes in flows and tails of stars and gas. If the galaxies have not merged so far, these phenomena cannot be due to the forces unleashed during a merger. Perhaps they were formed by interaction with other galaxies, or by gas dynamics within the galaxies themselves.” points out.

The researchers hope that Gaia observations will help make increasingly precise measurements of the structure and dynamics of galaxies beyond. ours.