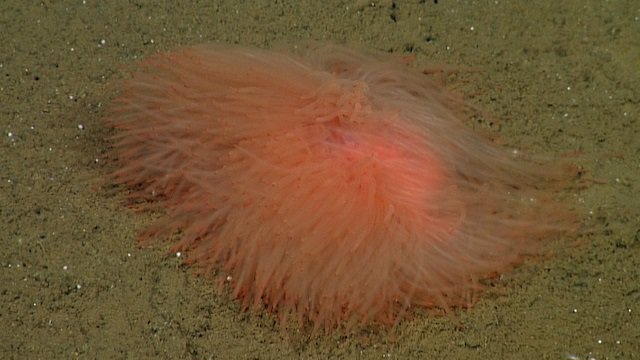 Biremis is an unusual type of spaghetti worm. They are named for their sweeping tentacles, which are used to pick up morsels of food. – MBARI

A new species of Biremis, or spaghetti worm, has been discovered on the seafloor of Mexico’s Gulf of California. It has stumped scientists because of its pom-pom shape.

This furry species was previously known only from the Bahamas. Following further examination and DNA testing by experts at the Scripps Institution of Oceanography, scientists at MBARI (Monterey Bay Aquarium Research Institute) was able to certify that he had found a new species of Biremis.

Biremis has no eyes, no gills, and no obvious chaetae, or bristles, along its body segments. It is also unusual in that its tentacles are inflated, giving it the pom-pom appearance that caught the attention of researchers.

The Gulf of California species lives in the depths, with most observations over 2,000 meters. It remains undescribed, but the team hopes to formally publish a detailed description in the scientific literature after more is known about its appearance, genetics, and natural history.

Spaghetti worms are a type of polychaete worm grouped in the Terebellidae family. Scientists have described about 400 different species of therebellids, which are found all over the world. They are relatively common and characteristically have numerous grooved tentacles for feeding.. Like other terebellids, Biremis lives on the ocean floor, but while most live in a tube or burrow, this species has been observed resting on the sea floor or swimming just above it.

Free swimming allows the worm to move easily and find new places to feed. Biremis uses its generous bundle of non-retractable tentacles to collect marine snow particles that have settled on the seabed, reports the MBARI in a statement.

Costa Ricans attend a massive pilgrimage of the Virgin of the Angels, after two years of pandemic