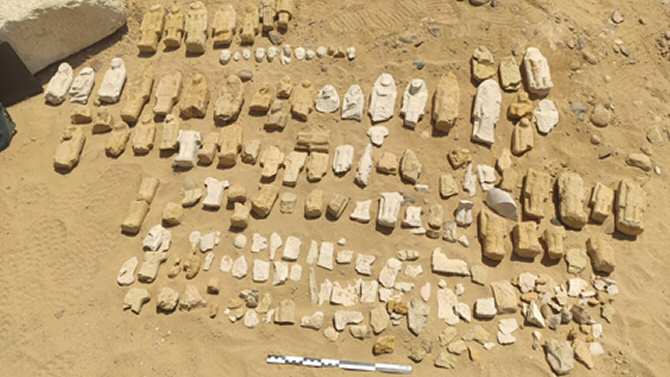 The research team from the Autonomous University of Barcelona (UAB) that is carrying out a rescue campaign in the Kom el-Khamasin necropolis, in the Southwest of Saqqara, Egypt, has discovered this year more than one hundred funerary statuettes of the high priest Egyptian Imephor, each unique in form and conception. The researchers have also worked on a second site in the concession that could be a real enclosure for the cult, from which they have brought to light numerous fragments of paintings that decorated the building.

This year’s campaign is the third campaign of the Hispanic-Egyptian Mission in Southwest Saqqara carried out by UAB researchers, led by Josep Cervelló, professor of the Department of Antiquity and Middle Ages Sciences, also director of the Institute of Ancient Near Eastern Studies (IEPOA). The work carried out for a month and a half has allowed them to complete the systematic excavation of the Kom el-Khamasin necropolis, where the mastaba of Imephor Impy Nikauptah, high priest of the god Ptah, the main divinity of Memphis, capital of the country during the Old Kingdom and the First Intermediate Period of Egyptian history (2400-2050 BC).

The most important and surprising finding this year has been the aforementioned hundred or so Imephor statuettes with the full name of the priest inscribed on the right arm. It is an unparalleled type of funerary statuettes, each one unique in shape and conception, measuring between 15 and 30 centimeters. The statuettes are of the same type as the 12 that were already known from the illegal antiquities market, of which only one has been repatriated. Last year, the researchers recovered two small, badly damaged fragments of these statuettes, which put them on the track of the group found.

Thirty-eight blocks or fragments of blocks with inscriptions and reliefs have also been recovered from Imephor’s mastaba, mostly from the ceiling of the burial chamber. Inscribed with two parallel strips of hieroglyphic text with the names and titles of the priest, with these fragments the ceiling of the chamber can be almost completely reconstructed and the content of the inscription is definitively established.

A sample of the more than one hundred funerary statuettes of Imephor Impy Nikauptah, complete or fragmentary. (Photo: UAB)

Northeast of Kom el-Khamasin, at a second Mission concession site that researchers identified in 2019 and named the Square Building, work has brought to light what would have been a 37-year-old royal building of a cultic nature. 5 × 33.8 meters, which was built in adobe with limestone elements (the threshold and the bases of the columns), with a well-defined central body and a whole series of corridors and lateral chambers.

In the central body of the building, the researchers have made a discovery that they describe as exceptional: a set of paintings in bright colors made up of hundreds of fragments of wall stucco, some of which are up to 30 centimeters long, which, despite its very fragmentary state, allow identifying royal iconographic motifs, such as a king wearing a ureus, a Horus of Behdet with outstretched wings, a horse and a chariot.

“Given that they are motifs clearly associated by theme and style to the royalty of the New Kingdom and that we have not found any evidence that it had a funerary use, we work with the initial hypothesis that the building was a royal complex for worship dating from this stage. of Egyptian history (1550-1070 BC)”, explains Josep Cervelló.

Another essential feature of this site is the large accumulations of pottery (36 in total) in the surrounding area, also dating from the New Kingdom and having a structural and semantic relationship with the complex. Several pieces of evidence suggest that the New Kingdom building may have been built on top of an earlier Old Kingdom site. “Future research will have to allow us to clarify it, which would be particularly interesting in relation to one of the scientific objectives of our project, which is the study of the patterns of cultural occupation of the territory during the Old Kingdom and the First Intermediate Period”, Cervelló specifies.

Other works carried out this year have made it possible to document the lithic industry on the surface of the extensive desert area of ​​the concession, which has been preliminarily dated to the central stage of the Paleolithic (Middle Stone Age). “This work will allow us to reflect on the role that northern Egypt could have played in the exit routes of Homo sapiens from Africa”, points out the UAB researcher.

The Kom el-Khamasin project, Hispanic-Egyptian Mission in Saqqara Southwest, is organized by the IEPOA-UAB and the Supreme Council of Antiquities of Egypt, and has the support of the Ministry of Science and Innovation, the Ministry of Culture and Sports, the Catalan Institute of Classical Archaeology, the Palarq Foundation and the Image Tours company.

The rescue intervention in Saqqara by the UAB research team also has the support of numerous people, who have participated through a micro donation campaign within the framework of the University’s research project patronage programme. (Source: UAB. CC BY-NC 4.0)

Real estate crisis in China, should the world worry?