Maryland’s wild horses trace their origin to a Spanish galleon 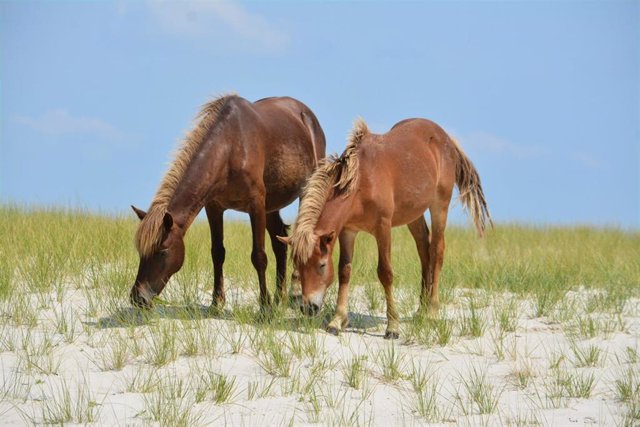 The Assateague Wild Pack is currently managed jointly by the National Park Service on the northern half of the island in Maryland and by the Chincoteague Volunteer Fire Company on the southern half in Virginia. – NATIONAL PARK SERVICE, CCO

ancient DNA of a horse’s tooth supports the thesis that wild horses that inhabit an island off the coast of Maryland and Virginia they descend from those who arrived in the shipwreck of a Spanish galleon.

Wild horses have freely roamed Assateague Island for hundreds of years, but exactly how they got there remains a mystery.

In a new study, ancient DNA extracted from a 16th-century cow tooth from one of Spain’s earliest Caribbean colonies turned out to be from a horse. This result may rewrite the history of Assateague horses.

These seemingly unrelated threads became intertwined when Nicolas Delsol, a postdoctoral researcher at the Florida Museum of Natural History, set out to analyze ancient DNA recovered from cow bones found at archaeological sites. Delsol wanted to understand how cattle were domesticated in the Americas, and genetic information preserved in centuries-old teeth held the answer. But they also had a surprise.

“It was a chance find,” he said. it’s a statement. “I was sequencing mitochondrial DNA from fossil cow teeth for my PhD and realized something was very different with one of the specimens when I analyzed the sequences.”

That’s because the specimen in question, a fragment of an adult molar, was not a cow tooth but belonged to a horse. According to a study published in the journal PLOS ONE, the DNA obtained from the tooth is also the oldest ever sequenced for a domesticated horse from the Americas.

The tooth was excavated in one of the first colonized settlements in Spain. Located on the island of Española, the town of Puerto Real was established in 1507 and served for decades as the last port of call for ships sailing from the Caribbean. But rampant piracy and the rise of illegal trade in the 16th century forced the Spanish to consolidate their power elsewhere on the island, and in 1578 residents were ordered to evacuate Puerto Real. The abandoned city was destroyed the following year by Spanish officials.

The remains of the once-bustling harbor were inadvertently rediscovered by a medical missionary named William Hodges in 1975. Archaeological excavations of the site led by distinguished Florida Museum research curator Kathleen Deagan took place between 1979 and 1990.

Horse fossils and associated artifacts are incredibly rare at Puerto Real and similar time period sites, but cow remains are a common find. According to Delsol, this skewed relationship is mainly due to the way the Spanish colonialists valued their cattle.

“Horses were reserved for people of high status, and having one was a sign of prestige,” he said. “There are full-page descriptions of horses in the documents that narrate the arrival of Cortés in Mexico, which shows how important they were to the Spanish”.

Rather, cows were used as a source of meat and leather, and their bones were regularly disposed of in communal waste heaps called middens. But the garbage of a community is the treasure of an archaeologist, as landfill waste often provides the clearest insight into what people ate and how they lived.

The specimen’s biggest surprise wasn’t revealed until Delsol compared its DNA to that of modern horses from around the world. Since the Spanish brought their horses from the Iberian Peninsula in southern Europe, he hoped that the horses still living in that region were the closest living relatives of the 500-year-old Puerto Real specimen.

Instead, Delsol found his closest relatives more than 1,500 kilometers north of Española, on Assateague Island off the coast of Maryland and Virginia. Wild horses have freely roamed the long stretch of barrier island for hundreds of years, but exactly how they got there remains a mystery.

According to the U.S. National Park Service, which manages the northern half of Assateague, the most likely explanation is that the horses were brought in the 17th century by English settlers from the mainland in an attempt to evade livestock taxes and ownership laws. fencing. Others believe that the wild herds descended from horses that survived the sinking of a Spanish galleon and swam to shore, a theory popularized in the 1947 children’s novel “Misty of Chincoteague.” The book was later adapted into a film, which helped spread the legend of the shipwreck to an even wider audience.

Until now, there has been little evidence to support either theory. Proponents of the shipwreck theory claim that English settlers would be unlikely to have lost track of valuable cattle, while those who favor the English origin of the herds point to the lack of shipwrecks nearby and the omission of horses. wild in the historical records of the time.

The results of the DNA analysis, however, point unequivocally to Spanish explorers as the most likely source of the horses at AssateagueDelsol explained.

“It is not widely reported in the historical literature, but the Spanish were exploring this area of ​​the mid-Atlantic in the early 16th century. Early colonial literature is often patchy and not completely comprehensive. Just because they don’t mention the horses doesn’t mean they weren’t there.”

The Assateague feral herds were not the only horses to revert to their wild heritage after arriving in the Americas. Settlers from all over Europe brought with them horses of various breeds and pedigrees, some of which broke their bonds and escaped into the surrounding countryside.