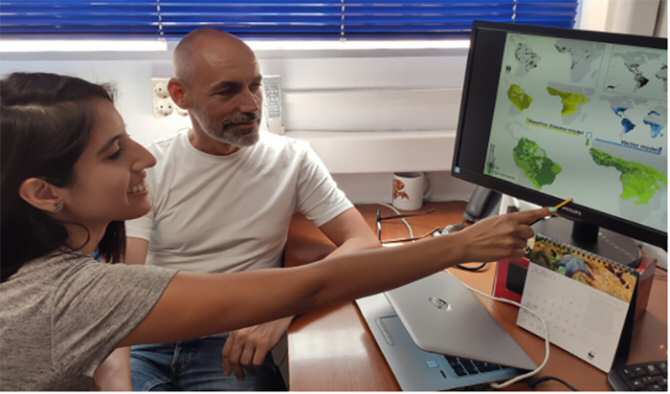 Yellow fever is a disease caused by a flavivirus found in tropical and subtropical areas of Africa and South America. The growing globalization of humanity, materialized through social phenomena such as the increase in the number of travelers who transport the virus from one part of the world to another, as well as the expansion of vector mosquitoes due to global warming, allow the appearance of new lineages of the virus and the increased risk to human health. For this reason, it is necessary to know how the risk area for this disease is changing on a global scale, in order to prevent and respond efficiently to the presence of new outbreaks.

The Biogeography, Diversity and Conservation group of the Department of Animal Biology of the University of Malaga (UMA) in Spain, has completed an investigation that deepens the dynamics of growth of the global risk of yellow fever transmission to humans .

The study has also delved into the geography of the influence of other primates and certain mosquitoes on transmission in jungle regions of America and Africa. These mosquitoes -not just any, but the Aedes Aegypti, and the Aedes Albopictus (the tiger mosquito) act as vectors for the transmission of yellow fever, both in zoonotic transmission -the one that takes place from non-human primates to people- and in anthroponotic transmission, which occurs from person to person.

According to the scientists, the contact between primates and humans, favored by deforestation, is growing, which increases the risk that new viral variants will emerge and reach the human population. This UMA study confirms that there is an important potential role for primates in transmission in southeastern Brazil, an area where there have been no cases of yellow fever for decades, but where for a few years there are often.

Pixel 6a defends the mid-range well, but the 60Hz screen is not forgiven

The study is signed as the first author by the PhD student Alisa Aliaga, who is accompanied by Raimundo Real, Jesús Olivero, Marina Segura and Carlos Marfil-Daza. It has been prepared in collaboration with the International Vaccination Center of Malaga, dependent on the Ministry of Health.

The results of the study predict that, in South America, the potential for zoonotic (i.e., non-human primate) transmission of yellow fever encompasses regions to the west, east, and center of the Amazon Basin, and much of the Atlantic Forest of Brazil (Atlantic Forest). In Africa, this potential could affect some areas north of open and wooded savannahs, and south of Central African forests.

The involvement of non-human primates in the transmission of the virus to our species in regions such as the southeast of Brazil, and the high rate of recent evolution of this pathogen, could cause new variants to end up reaching human populations, taking into account that zoonotic cycles are often closely related to urban areas.

Forest fragmentation tends to amplify the risk of disease transmission by increasing the proximity between human populations and wildlife. The study proposes a list of primate species to be taken into account if surveillance of yellow fever in these species is addressed. These are primates belonging to 13 genera in South America and 11 genera in Africa in which, on occasions, infection by the yellow fever virus has been confirmed; and whose geographical distribution coincides with that of human cases of disease.

These analyzes can help identify new areas that could be priorities for vaccination, for which it is proposed to consider three geographical scenarios of yellow fever transmission.

The first describes areas with very favorable conditions, both for the presence of the virus and for the presence of mosquitoes that act as vectors. This is the case in some areas of West Africa, Central Africa and southern Brazil. The models support the vaccination program planned by the Brazilian Ministry of Health in 2019 in many states of eastern Brazil, although this area is not yet considered a priority by the World Health Organization (WHO) and the Centers for Control and Prevention of Diseases (CDC) of the United States.

The second scenario describes areas with low -but not negligible- risk of yellow fever transmission, which are found in northern Namibia, western Zambia, eastern Ethiopia, and in some regions of Somalia. The WHO and the CDC do not consider these priority areas for vaccination.

Finally, the third scenario describes areas that are environmentally favorable to the presence of vector mosquitoes, but not so much to the appearance of the virus. This situation occurs, for example, in North America, southern Europe, Asia and Oceania, which are outside the yellow fever endemic area. In this situation, the most appropriate management policy would be to prevent the introduction of the virus through international travellers. There are countries that do not require travelers to have a yellow fever vaccination certificate, and yet they are in high-risk areas where the WHO recommends vaccination. The obligation to vaccinate all citizens entering countries with high or medium risk of transmission of the disease could also be established. In areas with a stable presence of yellow fever vectors that are close to endemic areas, vaccination should be an option to consider. A positive example to follow, in this sense, is the WHO vaccination program in the northern provinces of Argentina.

The study is titled “Yellow fever surveillance suggests zoonotic and anthroponotic emerging potential.” And it has been published in the academic journal Communications Biology. (Source: UMA)

Job offers in the United States "they got cold" in June