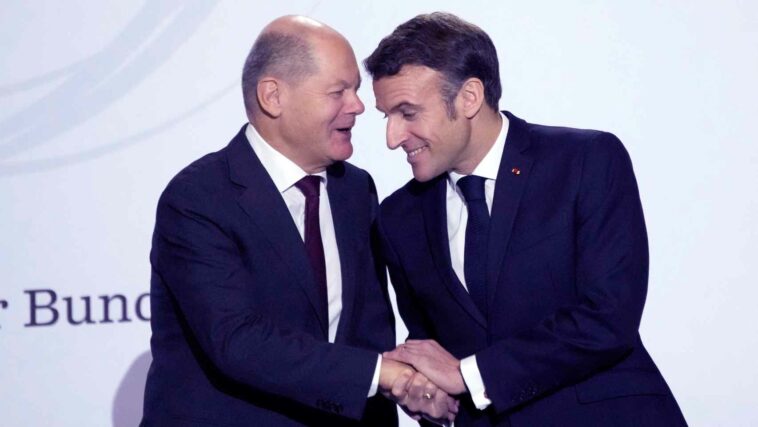 The French President, Emmanuel Macronhas certified this Sunday that “unfailing support for Ukraine will continue in all areas” and has ensured that the European Union “has not hidden or divided” as a result of the Russian invasion of Ukraine. “Since February 24, we have not hidden or divided and we will continue with our unfailing support for Ukraine, which will continue in all areas,” Macron told the German president. Olaf Schölzin an act held at the Sorbonne in homage to the 60th anniversary of the Élysée Treaty that sealed the Franco-German friendship.

“We will continue to give all our support to Ukraine for as long as it is necessary,” added the chancellor, who stressed the need to “defend” the “European peace project” in times of war. Scholz has ratified the berlin compromise to give Ukraine full military support “as broadly as necessary”, including tanks and air defense batteries“in close consensus among ourselves and with our allies in the United States.”

In his speech, the French head of state did not allude to the shipment to Ukraine of the Leopard 2, German tanks distributed throughout several European countries that they still need authorization from Berlin for delivery to kyiv. Macron has focused on the importance of Franco-German friendship in reinforcing “a more sovereign Europe”.

Macron and Scholz at the Sorbonne. 60th anniversary of the Élysée Treaty pic.twitter.com/LDLTyCDFUB

To emphasize these relations, Macron advocated that both countries, political and economic drivers of the EU, “reinvent themselves” and become “the pillars of the European re-foundation”. This complicity comes after Paris and Berlin had during 2022 important differences in the way of dealing with the consequences of the war in Ukraine, especially in energy and defense matters.

According to the French president, both capitals should promote a European Union “capable of assuming itself as a geopolitical power, in the area of ​​defensespace, diplomatic”. Macron also recalled how the histories of both countries are intertwined, which they were rivals in three wars held between the 19th and 20th centuriesand has ruled that France and Germany “are two souls in the same chest.” The presidents of the French Assembly and the German Bundestag also spoke at the event.