The blockade has been in place for a decade, since the beginning of the conflict and Syria’s isolation from the Arab world. The entry of sugar and petrochemical products was approved. Rumors about a resumption of diplomatic relations are intensifying, but so far there is no official confirmation. The central problem remains the economic issue in the face of Western sanctions.

Damascus () – After more than 10 years of interruption due to the war and opposing alliances, the Syrian government has decided to reopen imports of goods and products from Saudi Arabia. It confirms once again, the experts explain, the progressive détente between Damascus and Riyadh -very close to the rebels and anti-Assad groups during the bloodiest years of the conflict- and new “reconciliatory” gestures between the two Arab countries.

As reported by the Arab 21 newspaper, high levels of the government, beginning with the Ministry of Foreign Affairs, have given the green light to the entry of products manufactured in Saudi Arabia, particularly sugar and petrochemical derivatives. The newspaper cites an official document from Damascus showing government approval for the import of some 10,000 tons of sugar from the Wahhabi kingdom.

Rumors have multiplied in recent days about a possible rapprochement with Riyadh and the resumption of diplomatic relations between Syria and Saudi Arabia, after a decade of wars and violence that left almost half a million dead and millions displaced. The conflict has led the Syrian government to the isolation of the Arab world and it only recently seems to have begun to be overcome.

However, some analysts consider that the green light for the products has exclusively commercial reasons, mainly to compensate for Western sanctions, and there are no other political implications. Despite the ability of Syrian traders to find alternative sources of materials that can be imported from Saudi Arabia, the goal of the decision, says economist Iyad al-Jaafari, is to put pressure on Riyadh to ease restrictions on trucks. loaded with Syrian goods being transported to other Gulf countries”.

Al-Jaafari added that the decision “is intended to soften” Saudi Arabia’s position on its restrictions on Syrian imports into the kingdom, imposed in the past in response to the huge flow of narcotics – especially captagon – from Syria. As for the prospect of fully restoring relations with Assad, including from a diplomatic point of view, the Saudi government does not rule out this possibility a priori, as Foreign Minister Faisal bin Farhan himself pointed out to Bloomberg. However, for the moment, Riyadh continues to maintain an official position against the full restoration of relations and in recent months has blocked the return of Damascus to the Arab League. 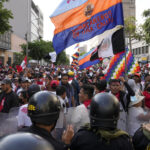