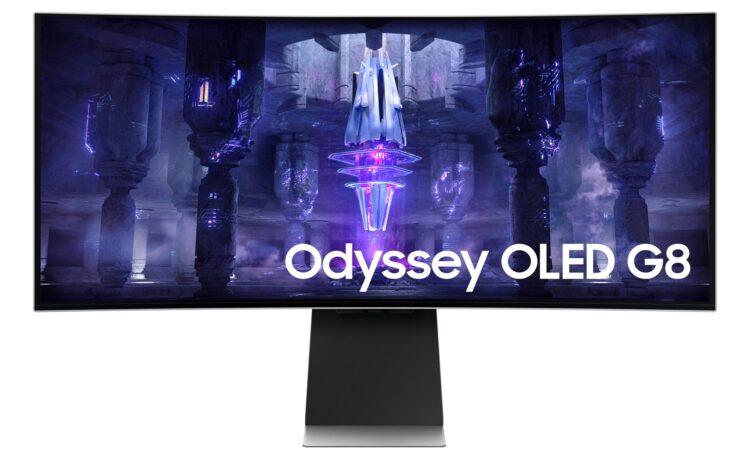 32
SHARES
230
VIEWS
Samsung’s Odyssey monitor family expands with the introduction of the Odyssey OLED G8, a display that doubles as an entertainment hub with the ability to stream content through the Smart Hub. In other words, it is a panel that does not need a PC or console, since it is capable of accessing various services by itself. streaming games and video. The Odyssey OLED G8 will be available worldwide from Q4 2022 for an undisclosed price.

The Odyssey OLED G8 data sheet tells us that we are dealing with a 34-inch monitor with Quantum Dot technology, QHD resolution (3440 x 1440), DisplayHDR 400, an aspect ratio of 21:9 and a curvature of 1800R. Samsung bills the screen as a “gaming monitor,” so it also has gaming-focused features like a 0.1ms response time, a 175Hz refresh rate, and support for AMD FreeSync Premium, a solution that dynamically adjusts the refresh rate of the monitor and graphics card to reduce tearing and offer smoother gameplay.

Beyond its technical characteristics, the Odyssey OLED G8 is a monitor that stands out for its ability to transmit content through Samsung’s Smart Hub. This platform gives you direct access to Xbox Cloud Gaming, the cloud gaming service associated with Game Pass Ultimate, Nvidia’s GeForce Now, and Google Stadia. If instead of playing the user wants to watch series or movies, the panel connects to the services in streaming Amazon Prime Video and Netflix. It is also capable of using YouTube. All this without the need for a connection to a PC, console or mobile device.

In addition to a monitor and an entertainment center for the streaming gaming and video, the Odyssey OLED G8 can monitor IoT devices over a wireless connection using the SmartThings app. On the other hand, Samsung adds that the monitor panel is equipped with an improved version of CoreSync and Core Lighting+. This lighting technology is located on the back of the monitor and adapts the colors on the screen. Additionally, the Odyssey OLED G8 features Micro HDMI (2.1), Mini DP (1.4), and USB-C ports. It also offers a 5W stereo speaker and a height adjustable stand (HAS).

The Odyssey OLED G8 will be one of the products that Samsung will show at IFA 2022 in Berlin, which will be held from September 2 to 6.

Was this what Mars looked like when it had water? ESA Reveals Spectacular Reconstruction of Holden Basin Geography