The Russian authorities have assured this Monday that they have arrested a man who was allegedly preparing an attack on the instructions of the Ukrainian special services, in the midst of the invasion of Ukraine, unleashed on February 24, 2022 by order of the Russian president, Vladimir Putin.

The Federal Security Service (FSB) has indicated that the man has been detained in the North Caucasus Federal District and has added that during the search of his home “means of terrorism prepared for use” were found, as reported by the agency. Russian news Interfax.

“As a result of the interrogations, the criminal has confessed his illegal intentions,” the agency said, noting that the case is being investigated. Russia already announced at the end of December that it had dismantled another attempted attack in the area and also accused the special services of Ukraine. 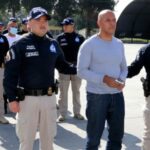