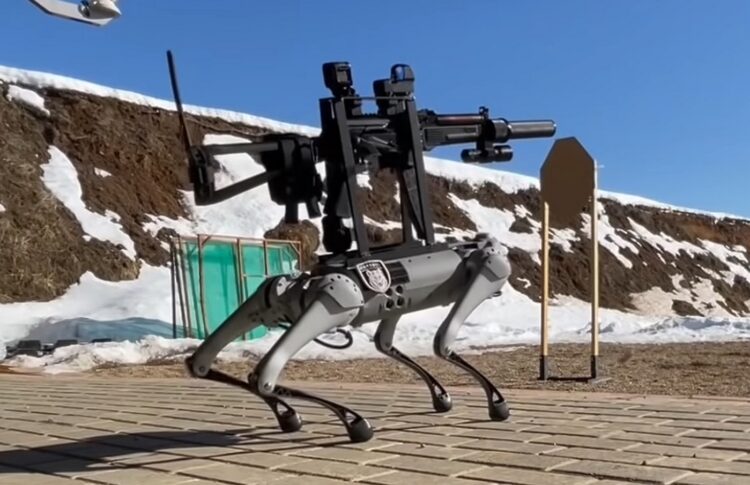 The human being is capable of developing fascinating technology. Unfortunately, it is not long before someone turns it into a weapon to kill other human beings.

Dogs have been used for millennia as guardians of property. But with a real dog, the most you can take away is a few bites. You always have a chance. With a robot dog with unerring marksmanship armed with a submachine gun…

The autonomous robots with artificial intelligence equipped with deadly weapons, they are not a novelty. All armies use drones equipped with missiles and other war weapons, who have already participated in real missions, causing enemy casualties. The French army even uses the Spot robot dogs in military missions.

But we see it as something alien, robots killing terrorists in a distant country, we don’t want to think too much about it. Until we discovered the possibility that a robot dog patrols the neighbor’s house armed with a submachine gun… And shoot anyone who gets close:

The video is quite spectacular, because we see a Unitree robot, a Chinese clone of the Spot robot from Boston Dynamics, firing a real machine gun at some human-height… targets.

The Youtube video has been created by a Russian businessman named Alexander Atamanov, founder of the company hoversurfingwhich is developing flying cars, explains TheVerge. He recently purchased a Unitree robot, which he has posed with on Facebook. It is possibly the same one that we see in the video.

He’s a techie, but also… guns. In the same Facebook account we can see him posing next to combat helicopters, or wielding the machine gun that is seen in the video. So everything suggests that not a military robot dog in developmentbut the new Alexander Atamanov toy that he has created to show it off on social networks.

In the video you can see how Unitree’s Robodog fires live fire from the submachine gun. But it doesn’t seem to be doing it autonomously, rather it is controlled by remote control. And it is clear that he is not prepared for it: the recoil is so strong that the robot is left on two legs, and ends up shooting into the air. But that is an easily solvable technical problem.

The worrying thing is not what we see here, a homemade experiment done to attract attention. The worrying thing is that when these robots are as common in homes as robot vacuum cleaners are today, someone will pull out a homemade kit to attach a gun to, and software to manage it autonomously, or by remote control. Welcome to BlackMirror…