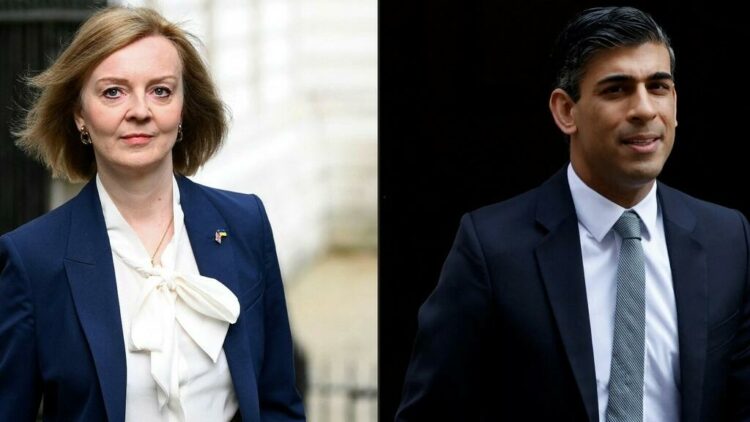 In the race for prime minister, UK Conservative MPs have narrowed the options down to Rishi Sunak, the former Chancellor of the Exchequer, and Liz Truss, the current Foreign Secretary. The two candidates will be put to the vote of the members of the Conservative Party to define the replacement of Boris Johnson.

After a lightning campaign, which began less than two weeks ago after the announcement of Johnson’s resignation on July 7, the Conservative deputies voted this Wednesday for the fifth and last time to choose the two finalists.

Which of the two nominees will enter Downing Street?

The nearly 200,000 members of the Conservative Party will have to decide between the two candidates in a mail-in vote, the result of which will be announced on September 5.

The appointment of Sunak and Truss means that the British government will be led either for the first time by a non-white man, or for the third time by a woman.

On Tuesday, in a fourth vote of the Conservative deputies, the former Minister of Economy remained at the head of the voting intentions, ahead of the Secretary of State for International Trade, Penny Mordaunt, followed closely by the head of diplomacy .

Sunak, 42, whose departure from the government in early July helped precipitate the fall of Boris Johnson, had been ahead since the first vote. But the competition is by no means won for this man who seems less popular among the party’s base than among the deputies.

MP David Davis accused Sunak of trying to “re-allocate” some of his votes to Liz Truss in order to remove Penny Mordaunt, whom he saw as more difficult to beat.

Mordaunt, 49, the short-lived defense minister for former Prime Minister Theresa May, came in second despite her limited experience in government, and was even the favorite according to a YouGov poll last week.

But this Wednesday, in the last legislative vote of the ‘tories’, Truss, 46, managed to unseat Mordaunt at the last minute. The final count in the House of Commons delivered 137 votes for Sunak, 113 for Truss and 105 for Mordaunt.

Turn the page on the Johnson era

The campaign was above all marked by the crisis of confidence and ethical questions. All the candidates claimed to want to turn the page on the Boris Johnson era, which was marred by repeated scandals.

With inflation rising again in June, reaching 9.4%, the hopefuls also debated how to tackle the cost-of-living crisis that is suffocating Britons.

Sunak, relying on his experience in government, promises to lower taxes on Britons when inflation is under control. This convinced supporter of Brexit has become the candidate of the moderate wing of the party and Boris Johnson loyalists are doing everything possible to defeat him, as they accuse him of having manipulated the latter’s fall and of having pushed for his departure.

Thus, paradoxically, it is Liz Truss, a former supporter of remaining in the European Union, who has the support of the right wing of the party.

A debate between the two finalists will take place on July 25, which will be broadcast on the BBC.

In his last question time before Parliament as British Prime Minister, Boris Johnson struck a note by closing his speech with “goodbye, baby” to the applause of the Conservatives, thus echoing Arnold Schwarzenegger’s famous quote in ‘Terminators 2’.

The fall of Johnson, who had to resign pushed by his own side after repeated scandals and lies, was as spectacular as his victory in 2019.

However, taking stock of his three years in office, the prime minister assured that his mission was “largely” accomplished and stated that he will spend the next few weeks “doing what I think the citizens expect him to do: advance in the topics for which we were chosen in 2019”.

“These last few years have been the greatest privilege of my life,” added the 58-year-old prime minister, who also took the opportunity to offer “some advice” to whoever succeeds him in Downing Street.

“Stay close to the Americans, support the Ukrainians, fight for freedom and democracy everywhere. Lower taxes and deregulate where you can to make this country the best place to live and invest,” he said.

With AFP and local media

air raid on the village where Cardinal Bo was born