“Putin spits in the face of Guterres and Erdogan” 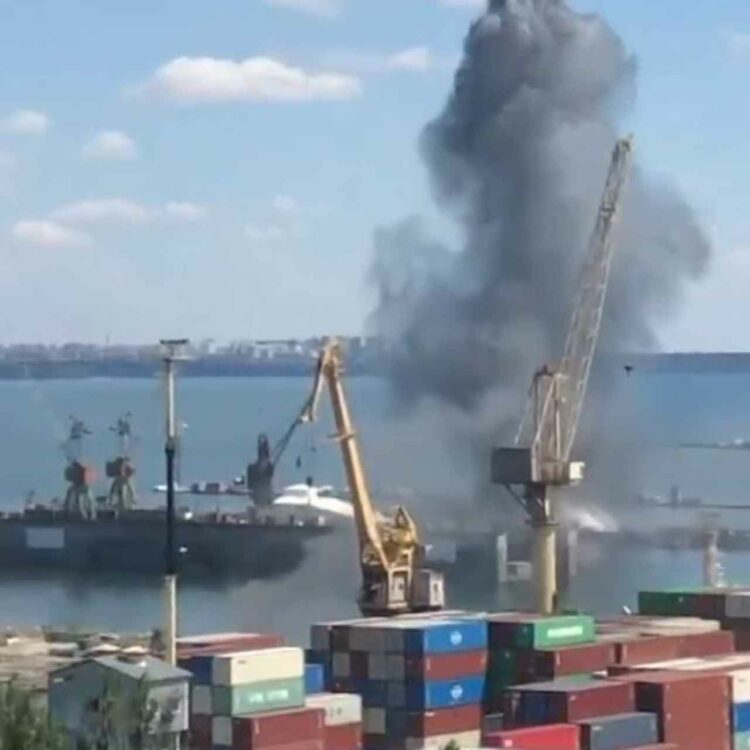 Today, July 24, marks five months since the beginning of the Russian invasion of Ukraine. And after more than 150 days of warRussia does not give up its goal and its struggle.

What seemed like a small step forward cordiality and peace, was soon ruined by the Kremlin. This gesture took the form of an agreement to facilitate grain exports by Ukraine.

Specifically, this treaty, sponsored by Turkey and the United Nations and signed separately by Russia and Ukraine, contemplates a maritime corridor to alleviate the food crisis caused by the Russian blockade of the Ukrainian ports of the Black Sea since the beginning of the invasion on February 24. Thus, and just one day after signing the pact, the Russian army has attacked the port of Odessa, a key point for the export of cereals.

Fact that puts the aforementioned agreement at risk. “The Russian missile is Vladimir Putin’s spit in the face of UN Secretary General António Guterres and Turkish President Recep Erdogan,” said the spokesman for the Ukrainian Foreign Ministry, Oleg Nikolenkocondemning the attack on the port of Odessa.

In turn, the President of Ukraine, Volodymyr Zelensky, declared that the attack on Odessa “proves only one thing: no matter what Russia promises, it will always find a way not to fulfill it.” But this attack has not only been condemned by the Ukrainian authorities.

Large column of smoke in the port of Odessa.


Both the European Union as the United States and the UN have shown their discomfort in this regard. Specifically, the United States condemned the bombing last Saturday and criticized the fact that only 24 hours after closing the agreement to unblock cereal exports, Russia “violates its commitment.”

“The Kremlin continues to show disregard for the safety of millions of civilians as it perpetuates its assault on Ukraine,” Secretary of State Kremlin said in a statement. Anthony Blinken, according to which Russia “deprives Ukraine of its economic vitality and the world of its food supply.” For the head of US diplomacy, this Saturday’s attack “raises serious doubts about Russia’s commitment to the agreement” the day before and undermines the work of the UN in Istanbul, the city where it was sealed.

Outrageous. Russia strikes the port city of Odessa less than 24 hours after signing an agreement to allow shipments of agricultural exports. The Kremlin continues to weaponize food. Russia must be held to account.

“Russia violated its commitment by attacking the historic port from which agricultural and grain exports would have been transported again,” said Blinken, for whom Russia bears the responsibility for deepening the global food crisis “and must cease its aggression as well as comply with the deal is totally closed. Rejection reactions also extended to the United States ambassador in kyiv, Bridget Brinkwho recalled through Twitter that the grain agreement has not been signed for even 24 hours and that Russia should be held accountable for what happened.

Similarly, his own Guterres He condemned hours later “unequivocally” the attacks perpetrated against Odessa, through a message on the Twitter social network from his deputy spokesman, Farhan Haq. In that message it is recalled that “yesterday, all parties made clear commitments to ensure the safe movement of Ukrainian grain and related products.”

“These products are desperately needed to address the global food crisis and alleviate the suffering of millions of people in need around the world. Full implementation by the Russian Federation, Ukraine and Turkey is imperative,” the message concluded. On behalf of the European Union, the High Representative for Foreign Affairs, Joseph Borrell“firmly” condemned the attack and criticized Moscow for its aggression against a “crucial” target for grain exports.

Sources from the Ukrainian Ministry of Agriculture recalled that in the port of Odessa there are stored grains ready for export. The attack would have affected those deposits, although according to what was specified later, it did not cause serious damage.

For its part, Russia denies any involvement in the attack, according to the Turkish Defense Minister, Hulusi Akar, it’s a statement. “The Russians told us that they had absolutely nothing to do with these attacks and that they were examining the matter very closely and in detail,” Akar said in the note published hours after kyiv denounced several attacks on Odessa.

In his note, the Turkish minister explains that previously, after being informed that there was “a missile attack”, he spoke with his Ukrainian counterpart, Oleksiy Reznikov, and with the Minister of Infrastructure, Aleksandr Kubrakov, from whom he obtained “the necessary information”. Ukrainian officials “stated that one of the silos was hit” by a missile; another fell “in an area near a silo, but there was no negative impact on the loading capacity and the capacity of the docks, which is important, and the activities there were able to continue,” he added.

Akar admitted that it was very worrying for Turkey that these attacks took place the day after an agreement was signed in Istanbul to unblock the shipment of grain from the ukrainian ports to international markets. “We were very concerned. However, we continue to fulfill our responsibilities in the agreement that we reached yesterday, and we also expressed in our meetings that we are in favor of the parties continuing their cooperation calmly and patiently,” the minister underlines in the note.

“It is our hope and desire that these facts and others like them are set aside as soon as possible and work begins as soon as possible in line with the agreement we have reached,” he insisted. Turning our backs on the international community and in this war that has already claimed the lives of at least 358 Ukrainian childrenRussia continues its offensive, concentrating its efforts in the Donetsk region, although, at least for now, without making any headway.

In this way, apart from the port of Odessa, it attacked several regions of Ukraine with missiles. If the attack on the port of Odessa caused no casualties, in the town of Kropinitski, in the center of the country, at least three people died and another 16 were injured after the impact of 13 Russian Kalibr missiles on a military airfield and a railway facility, according to regional authorities.

Specifically, the Russian Ministry of Defense reported this past Saturday of several missile and artillery attacks against positions of the Ukrainian forces, which, according to the military report, inflicted hundreds of casualties. However, the Russian military command made no mention of any progress on the ground.

“Missiles alone do not win a war,” said Igor Guirkin, the retired Russian officer who led the pro-Russian armed uprising in Donbas in 2014 under the alias “Strelkov.” Guirkinone of the most critical voices in Russia with the conduct of military operations, pointed out that the biggest problem experienced by the Russian forces operating in Ukraine is the lack of troops, something that can only be solved through a partial mobilization of the population.

But the Kremlin insists that “everything is going according to plan” and denies planning even a partial mobilization due to the unpopular nature of the measure since it would mean admitting that its “special operation” is a war, forbidden word in the Russian media. “Right now the only thing the Russian Army can do is repel attacks. It is not in a position to launch offensives like those in Severodonetsk and Lisichansk,” said the retired military officer, referring to the operations that ended a few weeks ago with the capture of those two cities in the eastern Ukrainian region of Lugansk.

counteroffensive in the south

Thus, the Russian operational pause is being used by the Ukrainian Army to prepare a counteroffensive in the south with the declared objective of recovering the city of Kherson, the capital of the homonymous region in the left bank of the Dniester, controlled by Russian forces since last March. According to adviser to the Ukrainian Presidency Oleksiy Arestovich, the Ukrainian army has practically managed to surround a Russian military group of just over a thousand men in the town of Visokopillia, on the administrative border between the Kherson and Mykolaiv regions.

“The only way out they have is under the fire of our artillery,” Arestovich said in statements to the YouTube channel Feigin Live, in which he stressed that “it is the first time that Russian troops have been in a pocket.” Arestovich stressed that the military who are in what he called a “tactical fence” have no choice but to lay down their arms. Before the Ukrainian preparations, Russia reinforces the defense of Kherson, according to the Central Intelligence Directorate of the Ministry of Defense of Ukraine, with the shipment of weapons and supplies camouflaged as humanitarian aid.