The collective Lützerath lebt! reported dozens of injuries, some seriously, in the ranks of the militants, in particular from dog bites and water cannons. According to German police, some 70 policemen were injured in clashes with thousands of protesters opposing the expansion of a coal mine in western Germany.

Activists opposed to the expansion of a coal mine in western Germany accused the police on Sunday, January 15, of having “violently” repressed their demonstration the day before, which ended in clashes in which dozens of police officers and demonstrators they were injured.

Some 15,000 demonstrators, according to the German police – 35,000 according to the organizers -, including the Swedish activist Greta Thunberg, protested against the expansion of an open-pit lignite mine that caused the destruction of the town of Lützerath, in the Rhine basin, between Düsseldorf and Cologne. The activists had occupied the place and the police had promised to evict them since Wednesday.

A spokeswoman for the protest organizers, Indigo Drau, accused the police at a news conference of “pure violence” and said the officers beat the activists “without restraint”, including on the head.

The Lützerath lebt! reported on Saturday dozens of wounded, some seriously, in the ranks of the militants. Twenty of them were hospitalized, according to a nurse from the activist group Birte Schramm.

Police said on Sunday that about 70 of their officers were injured on Saturday and that legal proceedings were launched against about 150 people.

The situation on the ground was “very calm” again on Sunday, according to police.

The evacuation operation in Lützerath is politically sensitive for the coalition of Social Democrat Olaf Scholz, who governs with environmentalists, accused by activists of having betrayed their commitments.

The Government considers the expansion of the mine operated by the energy giant RWE necessary for the energy security of Germany, which must compensate for the interruption of the Russian gas supply, a reason disputed by opponents, in the name of the fight against fossil fuels. 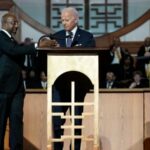