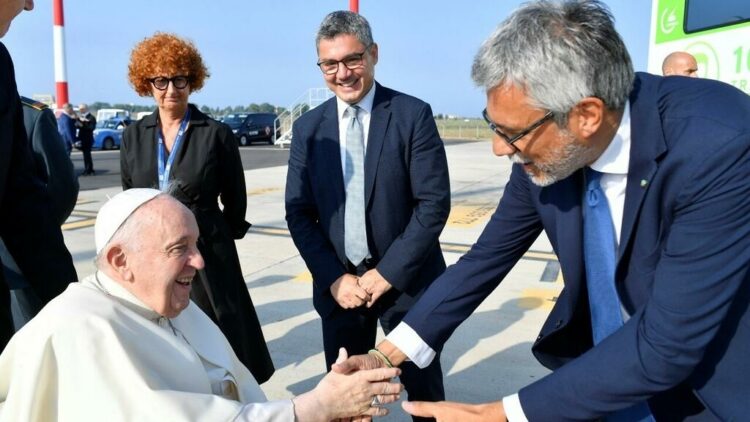 Pope Francis began this Sunday, July 24, a tense six-day official visit to Canada, with the main objective of apologizing to indigenous peoples for the abuses of missionaries in Christian boarding schools, between the 19th century and the 1970s. The pontiff also referred to the war in Ukraine and assured that he has a “great desire” to visit kyiv.

As a “penitential journey” Pope Francis described his official visit to Canada.

The highest representative of the Catholic Church, who will remain in the country for six days, starting this Sunday, July 24, aims to apologize to indigenous peoples for the abuses they suffered by religious in boarding schools between the 19th century and the 1970s, in the so-called “assimilation” processes.

It is a key step in the Vatican’s efforts to reconcile with North American native communities and help them heal traumas spanning generations.

“This is a penitential journey, we do it in this spirit,” said Francis, during the journey aboard the papal plane, before being received at the airport in Edmonton, Alberta, by Canadian Prime Minister Justin Trudeau and Mary May Simon, the nation’s first indigenous female governor general, of the Inuit people.

The pope has given priority to meetings with aboriginal peoples, he will hold at least five meetings with them, while talks with the country’s authorities are scheduled until Wednesday, July 27, in Quebec.

Yet indigenous groups are seeking more than just words as they press for access to church archives to learn the fate of children sent to boarding schools and never returned home.

Likewise, they demand justice and punishment for the abusers, economic reparations and the return of the indigenous relics that are in the possession of the Vatican Museums.

“This apology validates our experiences and creates an opportunity for the church to repair relations with indigenous peoples around the world (…) But this does not end here, there is much to be done. It’s a start,” said Grand Chief George Arcand Jr. of the Treaty Six Confederacy.

The Canadian government has admitted that physical and sexual abuse were rampant in state-funded Christian schools, which operated from the 19th century to the 1970s.

Some 150,000 indigenous children were separated from their families and forced to attend in an effort to insulate them from the influence of their native homes, languages ​​and cultures and “fit in” with Canada’s Christian society.

The country’s Truth and Reconciliation Commission, in 2015, called for a papal apology to be delivered on Canadian soil, but it was only until 2021, after the remains of around 200 children were found at the former Kamloops residential school in British Columbia, that the Vatican moved to comply with the request.

“Honestly, I think if it wasn’t for the discovery and all the attention that was put on clerics or the Catholic Church, I don’t think any of this would have happened,” said Raymond Frogner, senior archivist at the National Center for Truth and Reconciliation, which serves as a resource for the investigation of what happened in these Catholic schools.

This visit is also a test for the health of the pope, who had to cancel a trip to the Democratic Republic of the Congo and South Sudan in early July due to a knee problem that has recently forced him to use a wheelchair and a cane.

The Vatican leader also once again denounced the war launched by Russia against Ukraine, expressed his support for the attacked country and called for an end to the conflict that has claimed the lives of thousands of people and left more than 9 million citizens in exile.

“I have a great desire to go to kyiv,” the pope said when asked about a possible future trip to Ukraine.

No pope has ever visited Moscow and Francis has repeatedly condemned the Russian invasion of his neighboring country. Last June he implicitly accused the Kremlin of waging a “cruel and senseless war of aggression.”

.@pontifex said on Sunday he yearned to visit #ukrainein his efforts to try and bring an end to a five-month-old war that he has repeatedly decried.

“I have a great desire to go to #kyiv,” the pope said when asked about a possible trip to Ukraine.https://t.co/wL7fCXepuN

In an exclusive interview earlier this July, the religious leader told Reuters that he hoped to be able to go to the Russian capital and kyiv shortly after his trip to Canada.

Following the interview, Vladimir Putin’s government said it had not had substantial contact with the Vatican regarding a possible visit, while Ukraine renewed its invitation to the pontiff to address that nation.

For now, for this Monday, July 25, on his second day on tour in Canada, the pontiff has scheduled a meeting with the survivors of the missionary abuses, near a former boarding school in Maskwacis, where he is expected to present a official apology.

Mexico advances in the digitization of its SMEs, but it is not yet significant