After the resistance in Berlin, Warsaw announced on January 23 that “soon” it will formally request permission from the Olaf Scholz Administration to send the German-made Leopard 2 tanks in its possession to Ukraine. Polish Prime Minister Mateusz Morawiecki warned that his nation could even hand over those combat vehicles without the approval of the German government.

Poland, determined to up its ante for military aid to Ukraine amid war and Germany’s procrastination.

The Polish Prime Minister, Mateusz Morawiecki, announced this Monday, January 23, that he will formally request authorization from Berlin to send some of the Leopard 2 tanks that are in the hands of his Army to the Ukrainian forces.

Pressure is mounting for Berlin to send in its own combat vehicles or at least allow the countries that bought them to re-export them.

As a country that produces the required tanks, Germany has the right to veto the transfer and their consent is required to deliver them to a non-NATO nationas is the case in Ukraine.

However, Morawiecki warned that he could make his own decisions even without the approval of Olaf Scholz’s administration and that the move would proceed as part of a coalition of governments in the European Union backing kyiv.

“We will ask (Germany) for permission, but this is a secondary issue (…) If, eventually, we do not get this permission, we, within this small coalition, even if Germany is not in it, we will hand over our tanks, along with the others , to Ukraine,” Morawiecki said.

Finland and Denmark have shown their willingness to join the Warsaw initiative and the UK has promised to send some of its Challenger tanks.

While kyiv urges the delivery of those tanks that it considers vital to curb the war capabilities of the Russian Army, Berlin faces strong criticism for taking time to provide more powerful military equipment.

Although the German government has provided substantial aid to Ukraine, has shown caution in increasing its military cooperation and almost a year after kyiv’s request for the transfer of such tanks, Berlin has still not relented. A position that has generated reproach particularly from Poland and the Baltic States, on the eastern flank of NATO, which stand out as a greater threat from Russian hostilities.

After the meeting of NATO Defense Ministers, at the Ramstein military base, Germany, on Friday, January 20, the allies did not reach an agreement on this matter.

However, and in the midst of growing diplomatic pressure, Berlin would begin to relent after indicating that it would not oppose the delivery of the Leopard 2 if Poland so decided.

“It is important that we as an international community do everything we can to defend Ukraine, so that Ukraine wins and wins the right to live in peace and freedom again,” German Foreign Minister Annalena Baerbock said.

Morawiecki responded that “pressing makes sense” and that the words of the German official are a “spark of hope” that Berlin could even join the coalition that seeks to strengthen kyiv’s defenses.

Poland is estimated to be able to send as many as 14 Leopard tanks, but that would hardly impress in a war involving thousands of Russian Army tanks. Warsaw believes that if other countries contribute, the availability of powerful military vehicles could grow much larger and affect the course of the war.

Responding to promises of sophisticated Western weapons for kyiv’s troops, Moscow has intensified its warnings that the escalation risks “catastrophe.”

“We have said on numerous occasions that escalation is the most dangerous path and the consequences can be unpredictable (…) Our signals are not heeded and Russia’s adversaries continue to raise the stakes,” Ryabkov said.

For his part, the Kremlin spokesman, Dmitry Peskov, indicated that the latest moves to help kyiv “indicate a growing nervousness among the members of the alliance.”

“All countries that are directly or indirectly involved in supplying Ukraine with weapons or increasing its technological level will be responsible for that,” he said, backing up Ryabkov’s warnings.

In the midst of the difficulties in reaching agreements between kyiv’s western allies, the invading Army reinvigorated its occupationist aspirations. According to sources in the attacked nation, in the last 24 hours Russian forces shelled several towns and villages in the northeastern Kharkiv region, killing at least one 67-year-old woman. 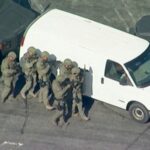