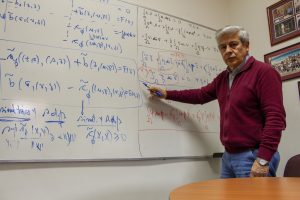 Gabriel Gatica is an academic from the UdeC and one of the founders of a prolific group of scientists from three universities, specialists in Numerical Analysis

One of the objective indicators that is usually used in the academic field to measure the productivity of a scientist is the number of publications to his credit in specialized journals in his area with a good impact factor. In this sense, it is a significant milestone in the career of any researcher to achieve two hundred of this type of publication.

This is the case of Gabriel N. Gatica, an academic from the Department of Mathematical Engineering of the University of Concepción, UdeC, and principal investigator of the Numerical Analysis Group of the Center for Mathematical Modeling, CMM, of the U. de Chile. This, according to statistics American Mathematical Society (MathSciNet), which, among other applications, lists this type of publication by author.

According to the aforementioned record, the also member of the Center for Research in Mathematical Engineering, CI²MA, of the UdeC published his first article in 1987. Under the title Some improvements of the finite element solution for one-dimensional problemswas included in number 5 of volume 24 of the International Journal for Numerical Methods in Engineering.

The scientist explains that having reached this milestone “is a joy and a great pride, first of all for the UdeC, to which I have already dedicated 46 years of my existence; secondly for my family and loved ones, who have always been there, constantly supporting me; thirdly, for all my national and foreign collaborators, and undergraduate and postgraduate thesis students, who are also largely responsible for what one can achieve in research; and in fourth place certainly for all the efforts and sacrifices made”.

The UdeC academic affirms that “although this could be considered merely statistical and circumstantial data, it has the additional merit of being accompanied by a significant number of citations, which naturally adds a qualitative component.”

For Gatica, this is one more piece of information that is consistent with others, such as the fact that her discipline at the UdeC appears in prominent positions in different quality rankings of higher education institutions such as that of Research.com, which places the Penquista study center in the national first place. “It is consistent with a similar measurement that had been made previously by Stanford University, in which, together with my colleague, Professor Raimund Bürger, and 10 other UdeC researchers, we appear in the top 2% of our disciplines worldwide.

I refer to Professor Bürger, who also stands out in Research.com, because, precisely, the Mathematics discipline of the UdeC, led to this day by our area of ​​Numerical Analysis, and carried out to a great extent, in addition, by Raimund and others researchers, has had a remarkable development in the last two decades at least”.

“This”, continues Gatica, “has been possible thanks to the significant and sustained support, both from the UdeC, represented mainly by the Rectors Parra and Lavanchy, as well as from our own initiatives, such as Fondecyt and Rings projects, and those joint with the Center for Mathematical Modeling of the University of Chile, namely, the FONDAP Program in Applied Mathematics of Conicyt (now ANID) and the Basal Projects.

In terms of challenges that are displayed in his area of ​​specialty, the UdeC Mathematical Engineer and PhD. of the University of Delaware (United States), affirms that “we are currently initiating the fourth version of our Basal Project, an initiative that has the leading participation of the ‘Bi-Regional Research Group on Numerical Analysis‘ that we have managed to form together with researchers from the U. del Bío-Bío (UBB) and the U. Católica de la Santísima Concepción (UCSC). Added to this are two Rings projects led by members of this group, which have recently started their work”.

“In one of the latter and in the Basal Project”, Gatica details, “the creation of a ‘Bi-Regional Doctoral Program in Numerical Analysis and Scientific Calculus’, which, in fact, has been operating in practice for a decade, through research collaborations and cross co-direction of postgraduate theses between researchers from the three local universities. The official realization of this project is a pending debt that the regional Cruch has with our area”.

Referring to the influence that her training has had in the realization of these advances, Gatica reviews the history of her discipline at the University of Concepción. “Back in the 80s, when I was newly hired as an Instructor, and after asking my direct boss at the time, Professor Hubert Mennickent, what was needed to qualify for a salary increase, he tells me, in a very simple and direct way: ‘Publish!’ I took his response as a motivational action on his part, which, in fact, was very consistent with everything Don Hubert did later to encourage and enable the development of Applied Mathematics at UdeC”.

“In this same direction, and from the perspective, in particular, of the development of Numerical Analysis, my area of ​​specialization”, highlights Gatica, “I also acknowledge with great emotion the invaluable support, encouragement and wise advice from Professor Maria Christina Bustosand the teachers Herman Alder Weller (RIP) and Patrick Basso (U. de Chile), all of them greatly responsible for my first steps as a researcher. I remember in particular that it was precisely thanks to Don Hermann and Patricio that I learned of the existence of Mathematical Review, precursor of the electronic database MathSciNet, and of its great relevance for the development of research in Mathematics worldwide. ”. And, he points out, “through a course that María Cristina gave me, I learned the first notions of the Finite Element Method, a subject in which I continue to investigate and learn to this day.”

Regarding his contribution as a trainer of advanced human capital in his area of ​​specialty, Gatica points out that “along with contributing, by the way, to the training of new professionals, through the different careers in which I have taught, mainly Engineering Civil Mathematics, one of the most comforting aspects of my career has been the permanent possibility of contributing to the training of new researchers through the various undergraduate and postgraduate theses that I have been lucky enough to direct”.

“In turn”, he affirms “having been able to motivate the formation of work teams that transcend the UdeC, and radiate, for example, to other local universities such as the UBB and the UCSC, and mutually nourish each other from this interaction, is something which has also given me great satisfaction”.

FIFA will invest more than 1,000 million euros in women's football until the 2023 World Cup