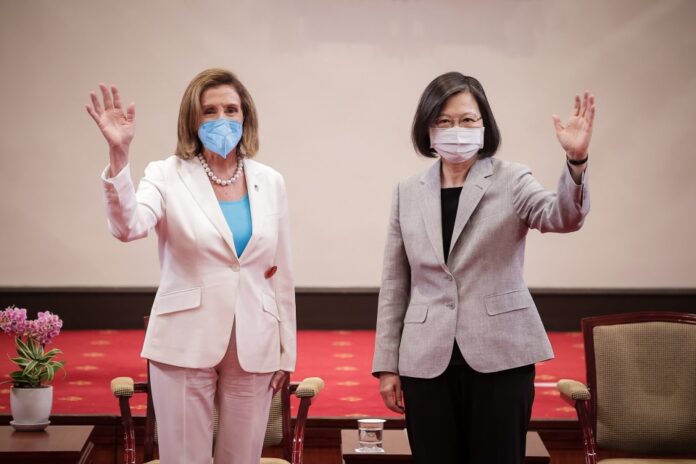 The president of the United States House of Representatives, Nancy Pelosi, affirmed that her country has an “iron” determination to preserve democracy in Taiwan in her talks with the island’s president, Tsai Ing-wen, while the repercussions of his historic visit, with China conducting military exercises and imposing trade restrictions, according to what was reported by the Kyodo News agency.

The highest-ranking US official to visit the Asian island nation in 25 years also told Tsai that Washington “will not abandon its commitment to Taiwan” and that “American solidarity with Taiwan is crucial now more than ever.”

Pelosi’s whirlwind trip to Taiwan, which began Tuesday night, came despite strong warnings from China, which considers the island its own.

The visit has heightened tensions across the strait, with Chinese military exercises taking place and Tsai’s office’s website briefly coming under a foreign cyberattack.

The Democratic leader of the House of Representatives – who is the third-highest-ranking US official after President Joe Biden and Vice President Kamala Harris – left the island on Wednesday night.

Taiwan’s president declared after Pelosi’s visit that “Taiwan will not back down, we will firmly defend our nation’s sovereignty and continue to uphold the line of defense of democracy.”

The Chinese military is scheduled to hold exercises, including live-fire drills, at six locations around Taiwan from Thursday to Sunday.

China begins military exercises around the island of Taiwan

China on Wednesday also suspended its imports of citrus and some fish from Taiwan and halted exports of natural sands to the island.

Taiwan’s Defense Ministry said the military is fully aware of the situation in the strait, both at sea and in the air, stressing that it is prepared for various responses and is “determined, capable and confident” in ensuring the safety of Taiwan. the island.

The ministry denounced the upcoming drills in the six zones as a move that will not only undermine regional peace and stability, but also harm China’s international image and hurt the feelings of people on both sides of the Taiwan Strait.

During her stay, Pelosi also visited Taiwan’s parliament, known as the Legislative Yuan, spoke with Taiwan Semiconductor Manufacturing (TSM) President Mark Liu and met with activists at the National Museum of Human Rights in Taipei before leaving for South Korea. South.

Chinese Foreign Minister Hua Chunying stated in a press conference, before the statements of the US representative that «the nature of the visit (of Pelosi) has nothing to do with democracy, but with the sovereignty and territorial integrity of China. What he has done is definitely not about upholding or defending democracy, but about provoking and infringing on China’s sovereignty and territorial integrity.”

The Chinese minister criticized Nancy Pelosi’s actions saying “Pelosi’s dangerous provocation is solely aimed at obtaining political capital for her. It’s an ugly political stunt through and through.

“In this ugly trick, democracy has been reduced to a cheap tool and pretext routinely used by the United States. While Pelosi is the one doing this bombastic act, it is the relationship between China and the United States and peace and stability in the region that is taking its toll.”

“As the number three figure in the US government, while problems with US democracy are piling up, Pelosi has been using taxpayer money and flying to Taiwan on US military planes. to perform a political trick »added the Minister.

“What he has done violates international law and the basic norm in international relations and endangers the internal affairs, sovereignty and territorial integrity of other countries. This has only served to open people’s eyes to the hypocrisy and ugliness of the US and further ruin the credibility of the US as a country.”

Finally, Chunying recalled the threats that China has been communicating since Pelosi’s visit to Taiwan became a reality.

“I would also like to remind Pelosi that she is facing a fifth of the world’s population and provoking the more than 1.4 billion Chinese people. People will not be fooled. Public opinion cannot be defied. Will Pelosi go down in history with a good or bad reputation because of this stunt? I’m sure history will give a fair answer.” the Minister concluded.