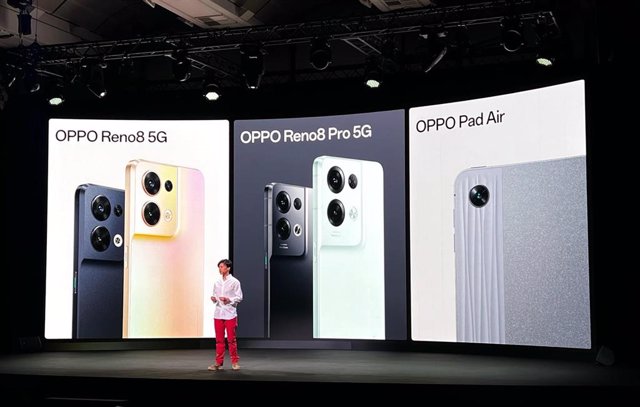 OPPO has presented this Wednesday to the new members of its OPPO Reno8 family, the Reno 8 and Reno 8 Pro smartphones, which focus on the photographic aspect, the screen and the fast charging system, with prices starting at 549 and 799 euros, respectively. The company has also announced the arrival of its first tablet for the European market, OPPO Pad Air, which will go on sale for 299 euros in its most basic configuration.

At an event held in Paris, OPPO has upped its bet on the ‘medium-high’ range, with ambitious products that incorporate significant improvements over their predecessors. “The Reno series, whose name comes from ‘renewal’, is in which we are always going to introduce something new”, they explain from the company, which seeks democratize access to technologies typical of the ‘premium’ ranges in these terminals.

both terminals, Reno8 and Reno8 Proshare the same rear camera, with a 50 MP main lens and Sony IMX766 processor (with f/1.8 diaphragm aperture), which is complemented by an 8 MP wide angle Y a 2 MP macro lens, in addition to the 32 MP selfie camera. They also have the same 80-watt fast charging system, which promises a 100% battery charge in 30 minutes.

They also have the same battery, 4,500 mAhwith an improved energy efficiency system that guarantees 1,600 charge cycles without the battery suffering, which translates into 4 years -certified- without it falling below 80 percent of its total capacity. Both ‘smartphones’ also share the improvement in fingerprint unlocking on the screen and the IP54 resistance certificate.

The difference at the photographic level between the two terminals marks it OPPO’s self-made AI chip, MariSilicon X, which seeks to take the image to another level at the ‘top of the range’ of this family. This NPU allows users who want to make a more professional use of their mobile phone to capture night video in 4K quality or process RAW photos in real time.

Reno 8 Pro also has improvements at the screen level compared to Reno 8, increasing the size of the panel (from 6.7 inches compared to 6.43 inches in the basic model) and improving the refresh rate up to 120 hertz (compared to the 90 Hz of the Reno 8). The unibody design is another of the hallmarks of the Reno family, that arrives in glass -with metal frame- in the Pro model, including a 75 degree bend in the camera module that gives it a ‘premium’ look.

Finally, Reno 8 Pro makes a leap in power level when riding the 5 nanometer Mediatek Dimesity 8100 MAX processorcompared to the Mediatek Dimensity 1300 of the Reno 8. In both cases, the configuration has 256 GB of storage and 8 GB of RAM, expandable to 13 GB (virtualizing RAM memory using the phone’s storage).

Within the framework of this launch, OPPO has also announced the arrival in Europe of his first tablet, OPPO Pad Air, which will be sold in two models (4+64 GB and 4+128 GB) for 299 and 349 euros, respectively.

The company highlights from this new ‘tablet’ its 10.36-inch 2K display and eye protection system, in addition to its ultra-thin design (6.94 millimeters) and the 7,200mAh battery. At the level of specifications, it also adds a surround sound of four Dolby Atmos speakers and commitment to the interconnection between mobile and tablet.

In this sense, OPPO affects the advances in smart features -thinking about multitasking-, which go from the classic split screen to the smart sidebar or floating windows. In the same way, he explains that they work hand in hand with Google in improving the services for their tablets, giving as an example functions such as Family Link or Kids Space.

As a final surprise, OPPO has announced the launch of the Oppo Band 2 bracelet, which will arrive in Spain in November for 69 euros, promising up to 14 days of battery life, and an 80-watt car charger, which will be sold for €49.99. In addition, the company has improved its Oppo Enco X2, with Golden Sound 2.0 software and a black version, which go on the market for 199.99 euros.

Odón Elorza, the loose verse of the PSOE that wants to return to the mayor's office of Donostia