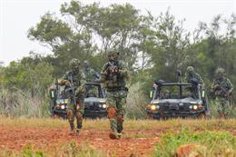 Australian Prime Minister Anthony Albanese has indicated on Wednesday that the Army is scheduled to undergo a review for the first time in a decade in the face of growing tension with China following the visit of the Speaker of the United States House of Representatives. , Nancy Pelosi, to Taiwan.

Albanese, who has warned of a possible increase in geopolitical tension at a global level, has defended, however, that the country’s Armed Forces “are prepared” although it is necessary to take preventive measures, according to the newspaper ‘The Sydney Morning Herald’.

For the president, it is the task of the Government “to carry out a frank review of the capabilities of the Army”, which will allow Australia to be prepared to respond to global challenges and guarantee the defense of the population and the territory.

Defense Minister Richard Marles has indicated that the review announced by the Government seeks to “give answers to the possible action of Australian forces in the event of a threat from other countries.” “The government agrees with this … but it leaves the question of what we will do in the air. Answering this question leads us to a review,” he pointed out.

Former Army Chief Angus Houston has pointed out, for his part, that circumstances in Australia have changed. “There is a war in Europe, problems of all kinds in Northeast Asia, especially around Taiwan and the South China Sea. Also in northern India,” he explained.

Thus, he stressed that “there are technologies involved.” “It is an environment that is constantly changing and it is absolutely necessary to review the current strategy in these circumstances, the worst I have seen throughout my career,” he concluded.

Captured from satellite: a baby island is born in the Pacific Ocean after a volcanic eruption | Video

President of Peru says he will denounce a TV program