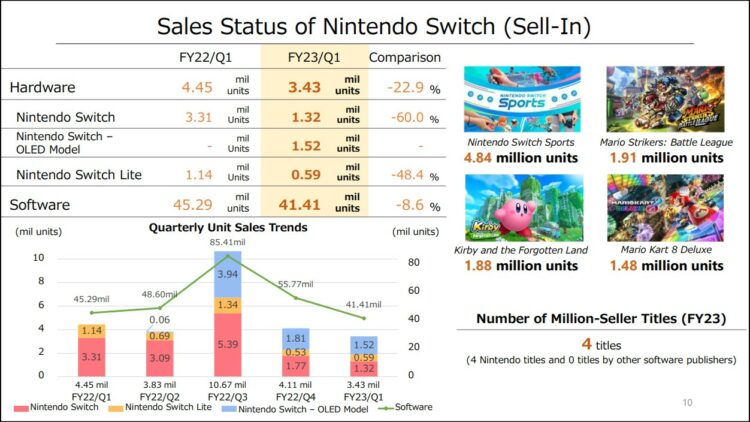 32
SHARES
230
VIEWS
Nintendo has published the financial report of the first quarter of fiscal year 2023 that came to an end on June 30, and as always it has done so with information that goes beyond the tedious economic numbers. Compared to the same period of the previous year, the Japanese have seen Nintendo Switch sales and revenues fall, something that has also happened in Sony (PS5) and Microsoft (Xbox), but unlike them the Big N has registered a noticeable increase in profits.

Specifically, during the last quarter 3.43 million Nintendo Switch were sold, 22.9% less than a year ago, when 4.45 million units were shipped. The best-selling model was the OLED with 1.52 million units, while the standard settled for placing 1.32 million units and the Lite 590,000 units. Nintendo attributes this decrease to the lack of semiconductors that during the first fiscal quarter affected the production of the console. It is the same evil that PlayStation 5 and Xbox Series suffer.

Software suffers from a downturn, but it was Switch’s second-best fiscal first quarter.

As of June 30, 2022, the Nintendo Switch had sold 111.08 million units worldwide. In its documentation, Nintendo recalls that we are facing a console that hit the market six years ago, but despite this and the differences between the models and some regions, its demand remains stable. Moreover, if there were no shortage of semiconductors, sales would be higher. The Nintendo president’s goal is to extend the Switch cycle “as much as we can.”

Regarding finances, during the last quarter Nintendo reported sales worth 2,266 million euros, 4.7% less than in the same period of the previous year. Despite this, the company’s quarterly profit was 876 million euros, a year-on-year increase of 28.3%. Regarding the result of the fiscal year that will end on March 31, 2023, the company maintains its forecast of ending the year selling 21 million Nintendo Switch, two million less than the previous year.